Albuquerque-based 10 Tanker Air Carrier has completed the modification of its third DC-10 large airtanker for aerial firefighting. The former airliner will be used to drop retardant—as much as 11,000 gallons per flight—on wildfires (see “The New Rainmaker,” in the May 2012 AOPA Pilot).

The U.S. Forest Service has designated the new aircraft as Tanker 912. It was inspected by the Forest Service in Albuquerque on Aug. 28, and will enter service at Castle Airport in Atwater, Calif. It joins 10 Tanker’s other modified DC-10s, tankers 910 and 911, under an exclusive use contract for the rest of the fire season.

The addition of a third DC-10 to the Forest Service’s contracted Next Generation tanker fleet further validates the need for this innovative tool in the future mix of national firefighting assets, said Rick Hatton, 10 Tanker’s CEO. “Firefighting professionals have increasingly recognized the DC-10s as the most innovative, cost-effective, and operationally valuable airtankers working today due to their retardant-carrying capacity, speed, and maneuverability in difficult terrain,” he said.

Tanker 912 was one of the last six DC-10s built, in 1988, and flew as a passenger airliner for Japan Airlines and Northwest Airlines, Hatton said. Then it was operated by Omni Air International before being placed in storage for a year and a half. “We bought five for future conversion to firefighting, and this is the first, making it our third tanker,” Hatton said.

“Next will be N612AX, a sister ship, which will be converted and replace Tanker 910 in March 2015.” The current 910 is a DC-10-10; replacing the airframe will standardize the company’s fleet with the later DC-10-30. “The -10 has been great as a tanker, but this will further improve reliability, give us a 12-year-newer airframe, standardize the engine type, and reduce part numbers in our extensive spares inventory,” Hatton explained. Modifications on the new Tanker 910 are scheduled to begin this month at Kalitta Heavy Maintenance in Oscoda, Michigan, which also modified Tanker 912.

Hatton sees a bright future for the orange-and-white tankers. “To date this year we’ve flown 243 missions on 61 fires in 281.6 flight hours,” delivering nearly 2.7 million gallons of retardant—accurately and timely, he said. “This would have taken a minimum of 900 flights by any other category tanker, existing or planned; cost three times as much; and often would have been too little, too late.” 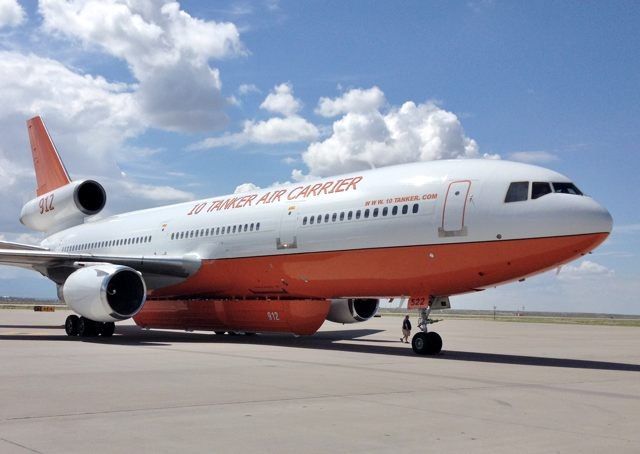 Technical Editor
Mike Collins, AOPA technical editor and director of business development, died at age 59 on February 25, 2021. He was an integral part of the AOPA Media team for nearly 30 years, and held many key editorial roles at AOPA Pilot, Flight Training, and AOPA Online. He was a gifted writer, editor, photographer, audio storyteller, and videographer, and was an instrument-rated pilot and drone pilot.
Go to Mike Collins's Profile
Topics: Aviation Industry, Technology