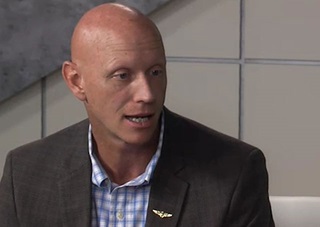 Two aircraft were lost in a matter of days, both showing signs of hypoxic pilots. George Perry, retired commander of a U.S. Navy F/A-18E squadron, was just settling into his new role as senior vice president leading the AOPA Foundation's Air Safety Institute, and recognized the telltales as quickly as anyone.

While NTSB investigations of the recent Cirrus SR22T and TBM 900 crashes has only just begun, Perry told AOPA Editor in Chief Tom Haines in an AOPA Live interview that there was enough reason to send an alert to pilots.

“Things point to possibly hypoxia being a contributing factor in one or both of these accidents,” said Perry, who has experienced hypoxia firsthand during Navy training, with about a half dozen visits to the hypobaric chamber and annual recurrent training during his 20-year career as a fighter pilot.

While military pilots train constantly, Perry is also familiar with the less structured world of general aviation, having flown for recreation and family vacations since he earned his pilots certificate as a teen. The owner of a Mooney M20, many of Perry’s 5,000 hours have been logged on GA trips, and he is well aware of the differences in the missions. Safety is something he takes to heart in any cockpit.

“Safety is something I take very personally,” Perry said. “Over the course of my 20 years (in the U.S. Navy), I lost several very close friends to aviation mishaps… It affects people’s lives and families.”

Perry said the “freedom to travel when you want and do what you want” is a very important part of general aviation, and he plans to find ways to incentivize self-discipline among GA pilots. While GA has made great strides in the past half century, there has been less progress made reducing the accident rate in the past decade. Perry is working on strategies to encourage “general aviation pilots to take that journey toward safety,” leveraging the many resources already offered by the Air Safety Institute, including online courses, seminars, quizzes, and accident analysis, to build a case for GA pilots to make recurrent training and education part of their personal routine.

In GA flying “the probability of an accident is pretty low,” Perry noted. “But the severity is pretty severe, as we’ve seen in the last week or so.”