Get the app Get the app
AOPA will be closing at 2:30pm ET Wednesday, November 23rd, and will remain closed Thursday and Friday in observance of the Thanksgiving holiday. We will reopen Monday November 28th at 8:30am ET.
AOPA Members DO more LEARN more SAVE more - Get MORE out of being a pilot - CLICK HERE
News & Media Flying Physicians support third class medical reform 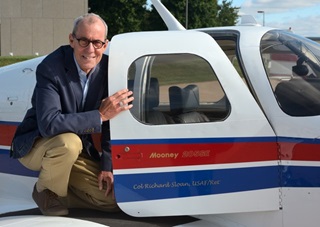 Eighty percent of doctors responding to a survey done earlier this year by the Flying Physicians Association believe that the current third class medical system is not necessary, does not add to safety, and can be eliminated for private flying. Many of those surveyed have backgrounds as senior aviation medical examiners (AMEs) and military flight surgeons.

Dr. Richard Sloan is a pilot and senior AME who practices medicine in York, Pennsylvania. He is also the president of Flying Physicians Association and spoke with AOPA Live host Tom Haines about the survey results.

According to the survey of Flying Physicians Association members, most agree that the third class medical is adding a burden with very little benefit, said Sloan. “There’s very little significant pathology that can be detected by an AME performing a flight physical,” he said. “Pilots self-certify their fitness to fly for as much as 60 months without the involvement of an AME. It’s a standard that has been safely and effectively used by sport pilots for more than a decade.”

In a Sept. 12 letter to Department of Transportation Secretary Anthony Foxx and Office of Management and Budget Director Shaun Donovan, the Flying Physicians Association urged both agencies to complete their reviews of the FAA’s notice of proposed rulemaking (NPRM) addressing third class medical certification reform in the next 30 days.

“What is needed is a system that better assists pilots by continuing to educate them about maintaining their medical health and provides them with information needed to continually self-assess prior to flight,” said the letter. “Additionally, a system is needed that encourages, instead of discourages, open and honest dialogue between pilots and their long-time personal treating physicians. We believe this is a much better practice than a cursory medical exam with a doctor who has no history or clinical knowledge of an individual, as is often the case with FAA physicals.”

Sloan said that Flying Physician Association members favor self-assessment and education process for pilots so they can be aware of what to watch for and be safe when they’re flying. “We [like] online courses for private pilots warning them about medications they might take, like over-the-counter drugs, alternative medications, and weight loss aids,” he said. “We want to try and promote the things they might do to keep them flying safely.”

The Flying Physician Association also wants to promote a good relationship between pilots and their physicians, said Sloan. “We want them to discuss honestly some issues about their fear of bringing up subjects that might not allow them to be certified,” he said.

The bottom line for the Flying Physician Association is about promoting education and safety, said Sloan. “For some private pilots not involved in highly complex flying, they could fly without a third class medical,” he said. “There needs to be education programs for pilots that teach what to do to stay healthy and what we all can do to promote good health.”