Get the app Get the app
Already a member? Please login below for an enhanced experience. Not a member? Join today
News & Media Satellite closes coverage gaps

A recent 7,000-mile demonstration flight from Alaska to the Gulf of Mexico and back showed that a space-based transceiver could keep track of aircraft using Automatic Dependent Surveillance-Broadcast (ADS-B) technology without use of ground stations.

The demonstration, announced Sept. 16 by Globalstar Inc. and ADS-B Technologies, which collaborated to create the ADS-B Link Augmentation System (ALAS), proved that a space-based system can track aircraft continuously—even in regions where ADS-B ground stations are absent. The demonstration flight traversed regions of the Gulf of Mexico and western U.S. where ADS-B ground station coverage is not yet available, and still allowed the aircraft position to be tracked continuously once per second. 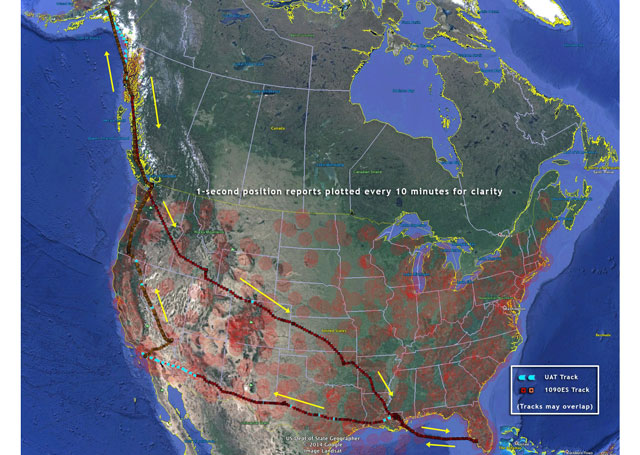 “With this test, we have proven that Globalstar can provide a very secure, reliable and low latency platform for space-based tracking of aircraft in real time,” said Jay Monroe, chairman and CEO of Globalstar, in a news release. “Further, with our unique architecture and scalable capacity, the ALAS system will eventually be able to track aircraft virtually anywhere on earth.”

The space-based system is also highly secure, “since the nature of the L-Band transmission and the antenna pattern make the aircraft's ADS-B position reports extremely difficult to intercept, jam or deceive," Monroe said.

Ground stations are used to send and receive aircraft position data gathered by on-board Wide Area Augmentation System (WAAS) GPS, allowing controllers and other aircraft to track position in real time with high precision. Aircraft operating over oceans, or otherwise out of reach of ground stations, cannot currently be tracked in this way. Skip Nelson, president of ADS-B Technologies, said the space-based alternative has been developed to close those gaps.

“We've been working tirelessly on tracking solutions since the loss of Air France 447 in 2009 in hopes that one day, missing aircraft will be a thing of the past,” Nelson said in the press release. “As our tracking map clearly demonstrates, we believe that day has finally arrived.”