Get the app Get the app
AOPA will be closing at 1:45pm ET on Tuesday, December 6th. We will reopen Wednesday morning at 8:30am ET.
AOPA Members DO more LEARN more SAVE more - Get MORE out of being a pilot - CLICK HERE
News & Media Training Tip: 'Detailed rules and requirements'

A student pilot in a ground school class is working through scenarios for a theoretical flight that transits the Class D airspace of two towered airports beneath or adjacent to overhanging “shelves” of Class B airspace near Boston, Massachusetts.

The student has spread out a sectional chart, drawn a course line, and is explaining to his instructor that he would remain beneath Class B airspace, and contact the two airports’ control towers for permission to enter their Class D airspace. The Class D airspace at both airports, Lawrence Municipal Airport and Bedford’s Hanscom Field, rises to 2,600 feet.

Flight at 2,500 feet would place the flight within the top 100 feet of the Class D airspace—so why not proceed as explained?

There must be a reason; clearly, it will take more research to dig out the answer. Where to turn for the information?

When examining details for VFR operations in and around major terminal areas, a must-have resource is the current local terminal area chart (TAC). You may think of it mainly as a chart that presents visual information at a scale of 3.43 nautical miles per inch of chart area, but its value goes beyond ease of visual inspection.

"Radials and arcs used to define Class B are prominently shown on TACs. Detailed rules and requirements associated with the particular Class B are shown. The name by which the Class B is identified is shown," explains the FAA’s Aeronautical Chart User's Guide. For example, the one the student needs is labeled "VFR Terminal Area Chart Boston."

Surveying the Boston TAC area around Bedford, the student pilot finds the needed information in a note: "Aircraft requesting to transit the Bedford Class D airspace at or above 2500 MSL contact Boston APP on 124.4."  A similar note appears next to the Lawrence airport’s symbol.

The student notices other details. An arc overlapping Bedford's airport symbol, marking the point where the floor of Class B airspace changes, is identified as 15 nautical miles from Boston. From what point or navaid is the distance measured?

Another detail shows a Boston IFR arrival route passing close to Lawrence. VFR pilots flying in the area would be well advised to note the range of altitudes used for those arrivals. 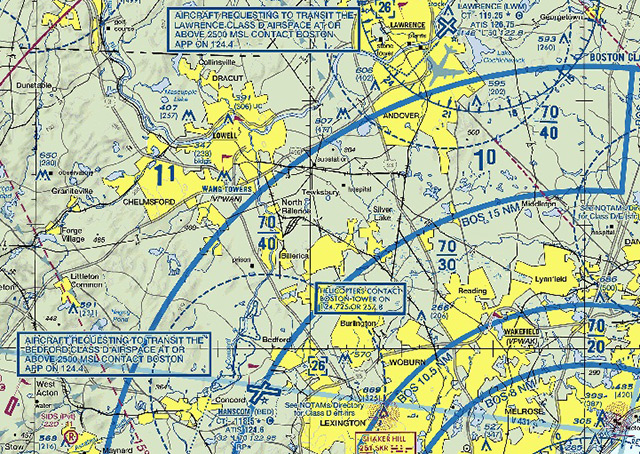