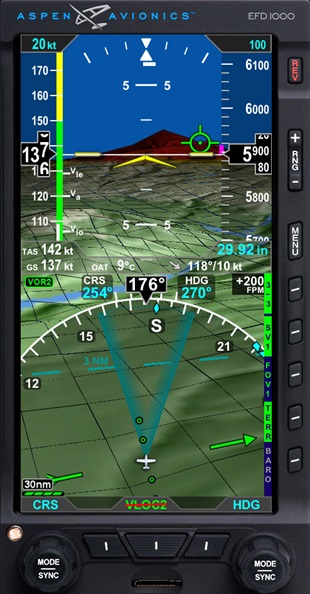 It may be a first, and is certainly an unusual approach to marketing avionics: Aspen has secured FAA certification for a trial version of its synthetic vision feature, available on Evolution 1000 Pro models designed for IFR operations.

Evolution Synthetic Vision is a $2,995 feature of the Evolution 1000 Pro primary flight display, and each new Pro PFD sold (they list at $10,167) will come with a 10-hour trial, allowing pilots to experience synthetic vision before paying for the feature.

"A lot of testing” was required to make sure the 10-hour trial would not cause problems when the time was up (the software disables synthetic vision on the next startup following 10 flight hours, unless the user has purchased the feature, and it will not turn off in flight). George Pariza, Aspen’s director of product marketing, said certification of the trial gives customers a firsthand look at a valuable feature, and he was not aware of another avionics company that offered a similar feature trial in a panel-mounted device.

“I think it’s just another case of Aspen Avionics breaking the mold and being innovate,” Pariza said.

Aircraft Electronics Association spokesman Geoff Hill said there are few, if any, comparable offers in the industry. Sirius XM offers free trials of its satellite service, but Hill said Aspen may well be breaking new ground. The company is known for innovation, and “this creative promotion certainly holds true to that.”

Evolution is designed to cover several price points—and missions—with a single set of hardware. The Evolution VFR PFD is listed at $4,995, and can be upgraded to the Pro version (designed for IFR flying) for $4,690. (Aspen has posted a handy chart with Evolution PFD prices and feature comparisons.)

An Aspen analog conversion unit, priced at $1,000, is required for autopilot integration of the VFR model (single-axis only, as there is no glideslope capability in the VFR software), and also for an upgrade to the Pro version, which supports two-axis autopilot integration, an HSI, and other features. Otherwise, the only difference between the VFR and IFR models is software. A customer who buys the Pro version outright will save $498 compared to the cost of upgrading the VFR model to the same features, but the display installed in the panel (delivering a six-pack’s worth of information, plus CDI, in the vertical panel footprint of two steam gauges) need not be switched if the owner opts to upgrade—everything is done with software.

Upgrades can also be purchased to enable Evolution Hazard Awareness, a combination of weather (including lightning) and traffic hazard information displayed on a two-dimensional map, and ADS-B integration.

Aspen announced that the Evolution VFR PFD was on the way in March and announced FAA certification of this new model Sept. 22, the same day FAA approval of the synthetic vision trial included with Evolution Pro models was announced.

Aspen noted in its news release that VFR pilots and IFR pilots whose currency has lapsed account for about half of the pilot population.

“From the very beginning, Aspen has been committed to developing general aviation solutions that are innovative, safe, affordable, and contribute to the future growth of the pilot community. This is a segment of the flying public that has been underserved with an affordable glass panel solution,” said John Uczekaj, Aspen president and CEO, in a news release.

The Evolution VFR PFD comes with an integrated air data computer and attitude/heading reference system, and can be integrated with existing avionics and panel cutouts (those two steam gauges). It has a built-in backup battery and emergency GPS, though it cannot function as a primary GPS source. Pariza said the company is working on additional products to expand the automatic dependent surveillance-broadcast (ADS-B) product line.