The mission of the Black Pilots of America is to introduce and educate underserved and underrepresented youths to the world of aviation and promote science, technology, engineering, and mathematics (STEM). As president of Black Pilots of America’s Red-Tailed Hawks Flying Club, Jesse Hayes is doing just that at the organization’s Mukilteo, Washington, headquarters.

The club, formally a chapter of the Black Pilots of America, was formed on Nov. 24, 2013, said Hayes. “Fifteen people showed up and we kicked it off from there,” he said. “We earned our charter from BPA on Jan. 17, 2014.” The club has 25 dues-paying members, along with the parents of student members, he added. It is a legacy of Houston-based Sky Ranch Flying Service, founded in 1946, and the Bronze Eagle Flying Club of Houston, founded in 1967.

The name came from several inspirations after mulling names including the Silver Surfers or Bronze Eagles West, said Hayes. “The red-tailed hawk is a reference to the Red Tail Tuskegee Airmen pilots of World War II. There’s also the sentimental connection to our Seattle Seahawks football team,” he said. “Also, the red-tailed hawk is a prolific bird that lives all over the U.S., and is adaptable in different climates.”

The Red-Tailed Hawks is the first Black Pilots of America chapter in the state of Washington, said Hayes. “In less than a year, we have grown to 33 dues-paying members and have pledges from five others to join in the near future,” he said. “In our flock we have student pilots, private pilots, airline transport pilots, U.S. Air Force pilots, naval aviators, Boeing test pilots, and aerospace engineers. We are striking a positive chord in the community and our work has just begun.”

Chapters like the Red-Tailed Hawks Flying Club serve as an arm and advocate for the national goals of Black Pilots of America, which is a 501(c)(3) organization, said Hayes. “As chapters, we can latch onto BPA’s status for tax exemption and fundraising,” he said. “Local chapters operate autonomously, but we do support national objectives and programs, especially the Les Morris Summer Flight Academy.”

The two-week summer academy, held in July at Texas Southern University in Houston, provides youths aged 15 to 19 from across the country 10 hours of flight time and 40 hours of ground school. “We raise funds to send our kids to the summer academy so they can learn how to fly, experience aviation history, and interact with their peers,” said Hayes.

The club’s main goal, in alignment with Black Pilots of America, is to encourage more African-Americans to become pilots, said Hayes. “The numbers speak for themselves. Only 2 percent of pilots are black. And that number is generous because it’s hard to get real statistics,” he said. “The aerospace industry is a $2 trillion a year business and our community isn’t getting its share of that pie.”

Hayes said that when he moved to the Seattle area, he learned that African-Americans only made up 4 percent of the community. “But there’s an unimaginably rich aviation community here, represented by the Navy, Air Force, Army, Boeing, and Alaska Airlines,” he said. “But yet our demographic was being left out. People only know what they know, and if they’re not exposed to things like aviation, they won’t see the opportunities available.”

While the club doesn’t have a fleet of aircraft, there are members who own their own airplanes, said Hayes. “We mirror the BPA membership and bylaws. Dues for regular members is $70 a month, which covers anyone with any type of FAA or military aviation certificate,” he said. “Student membership is $20 for anyone in school through college.”

The whole point of the club is to offer members camaraderie and support, said Hayes. “We also work to attract youth into aviation. In our youth program, every month we get together to teach them about aviation and get them shored up with knowledge hoping they will participate in the summer academy,” he said. “We also partner with our local Experimental Aviation Association chapter to connect youths with ground school and scholarship opportunities.”

The club is looking to partner with any other organizations to tap into all resources available to help young people learn how to fly, said Hayes. 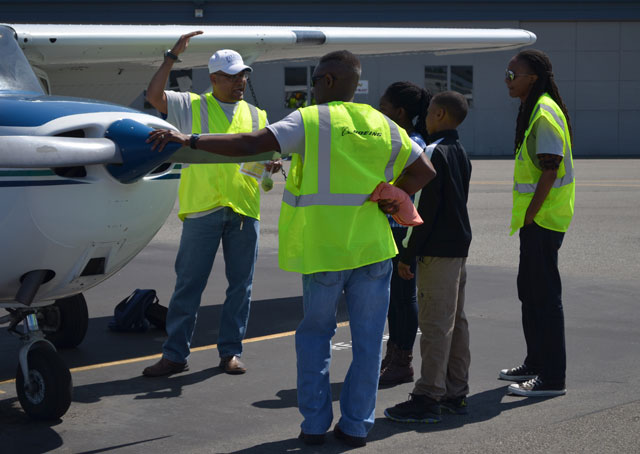