Get the app Get the app
AOPA will be closed July 4th, in observance of the Independence Day holiday. We will reopen at 8:30 am ET on Tuesday, July 5.
News & Media Letters from our March 2015 Issue

Letters from our March 2015 Issue

Everybody loves their mother—especially when she’s a tough-talking pilot like Dave Hirschman’s mom.

Everybody loves their mother—especially when she’s a tough-talking pilot like Dave Hirschman’s mom.

Dave Hirschman’s March story, “My Toughest Student,” touched me more than any other over the 45-plus years I’ve been an AOPA member and an avid reader of AOPA Pilot.

They sound like a terrific mother/son combination. I envy their flying adventures and wish them many happy hours aviating, navigating, and communicating.

Now, at last, I know why I adore Dave Hirschman’s articles so much. It’s because of his mother’s love of flying, her adventuresome spirit, and her willingness to not only keep flying but to earn her instrument, seaplane, and glider ratings and her tailwheel endorsement.

She’s a true role model for any senior. To her son, I say, let that woman swear anytime she wants. She’s earned the right to outswear a soldier with her gumption, fortitude, and flying skills. I hope to meet her someday and tell her that. She should be AOPA’s poster girl!

“This is the best story I’ve read this year and thank you for sharing. I’m 49 years old and have been flying for the past six years and wondered about flying in my later years. Your story has giving me great hope of my future years in the cockpit and obtaining future ratings.”

In review of “Lessons from Roselawn,” I was impressed with how Thomas A. Horne condensed a plethora of information into a relatively short document. It was distributed to our pilots in a company safety meeting. One of our captains and I flew for Simmons from 1988 through 1994 and 2013, respectively.

Horne’s article helped explain to many pilots what the Simmons ATR pilots had suspected. There was an unknown issue regarding the airframe icing tendencies of the ATR. Following the accident I became immersed in reading all I could find about aircraft icing. Having always been interested in meteorology, this was enjoyable for me, much less the motivation to do so. It has served as an excellent reminder to me (as do your articles), and a continuing educational device which I have used in my corporate aviation career.

Thanks so much for dissecting and disseminating another landmark accident so well, to pilots young and old. I’m certain AOPA Pilot’s P&E articles have helped to save many lives over these decades. 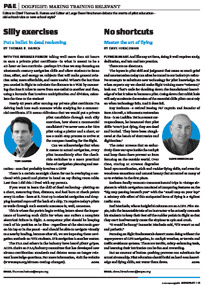 I always enjoy reading “Dogfight” and considering my own opinions on whatever subject matter might be discussed. I must actually respond (“Making Training Relevant”).

Sorry, Mr. Haines, but I must agree with Mr. Hirschman. The likelihood of a total power failure, inclu

ding backup batteries, is rare—but rare is still not zero. Depending upon the electronics used, many smaller/portable devices may not adequately show the terrain below you or obstacles along the way.  It’s far too easy, as Mr. Hirschman points out, to become mesmerized by the pretty colors and simplicity of a purple line.

Electronics and technology advances are the sign of our times, but give me a map, compass, and clock any day over the gadgets. I still enjoy the view of that moving map under me. Advance to your gadgets if you must, but many small-airplane GA pilots can’t afford such frills—and really don’t need them anyway.

Thanks for the “Dogfight” on abandoning ancient navigation skills for real-world navigating—I totally agree. I just don’t see how teaching mental gymnastics and paper map manipulations—which are far more distracting in the cockpit—instead of a simple glance at a GPS to quickly ascertain that one is where he or she should be, isn’t better.

The FAA needs to stop testing 1930s navigation techniques when virtually no pilots use them anymore. There are simply too many distractions for pilots as it is—and we don’t make for very good flight computers or multitasking machines.

Stick and rudder skills—and good visual flight rules—are not in the least reduced by relying on the glowing screen for navigation. Most pilots know better than to keep their eyes locked on a moving map. We are smart enough to know that the moving map doesn’t tell us all we need to know to fly the airplane.

And then, just look at the line. And arrive when you arrive. Or you can be the best navigator possible, and identify your points on the ground by reference to a map, reference to a clock, and reference by passing radials. If you want to go to the next step, you will adjust your airspeed to make all of your checkpoints as you planned. Both of the attitudes posed will get the job done. The question each pilot needs to ask is, “How good is good enough?”

“Mr. Haines is probably one of the guys who advocated removing the spin demonstration requirement from the private pilot test. He probably flies with his feet on the floor and avoids ADF approaches. Aviation needs aviators, not passengers.”

“Mr. Haines hit the mark. Almost nothing is the same as it was 40 years ago. It would be interesting to survey commercial pilots and ask how many of them do not use a computer to do all the calculations. Or, for that matter, how many of them can do it the good old way without having to refer to anything and get it precisely correct.” 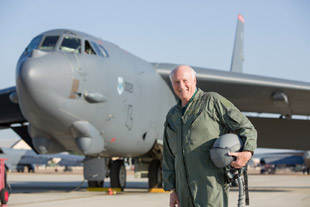 On January 18, 1957, and with the help of midair refueling, three Boeing B–52s were about to become the first jet airplanes to fly nonstop around the world. At 18 years of age, contributor Barry Schiff wound up being the charter pilot assigned to fly two Life magazine photographers in a Beech Bonanza to March Air Force Base in California, where the bombers would be landing. “I was allowed to hang with the photographers at the runway’s edge,” says Schiff. “As the first of the B–52s approached the threshold, one of the photographers lobbed a camera at me and said to just point and shoot, hoping, I suppose, that I would luck out and get a decent shot.” As Schiff tracked the arriving bomber through the viewfinder, he recalls wondering what it would be like to fly such an awesome machine. He found out 57 years later and describes his incredible experience in “Broad Shoulders,” page 76.