I had heard nothing on the radio while warming up the airplane. That was mistake number one.

Fright in the Idaho backcountry 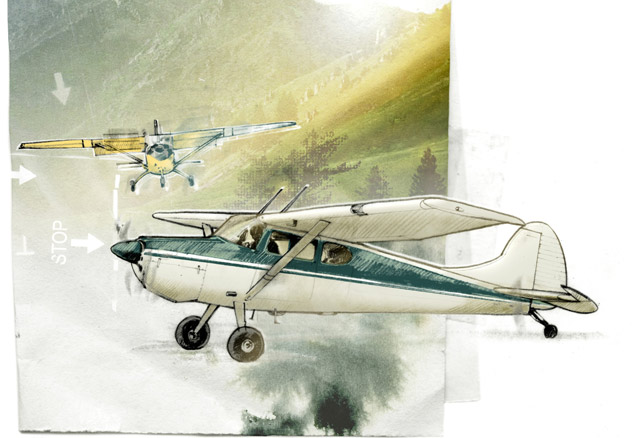 It was a beautiful Indian-summer October in Idaho. Daytime temperatures were reaching the upper 60s, and lows were still above freezing. A friend and I decided to take one last flight into the backcountry to go camping in my Cessna 170B.

We had made two similar trips during the summer and had camped at different airstrips each time. This time, we chose an infrequently used strip closer to home. The big game season was not yet open, so we had the airstrip and the proximal area to ourselves.

I always keep a .22-caliber rifle in the airplane as a survival weapon and a “grouse getter,” and although I toted it along, we saw no grouse (the season was open for grouse and you can use “any weapon” in Idaho to harvest them). I think all the blue grouse were still up high enjoying the nice weather, too. So we ended up not making any artificial noises the entire trip. Even the wind was dead calm as the high pressure held true. No airplanes flew overhead; we heard no airplane noises in the distance. We both remarked how our voices were the only unnatural sounds we heard the entire weekend.

Sunday morning dawned calm and clear, and we leisurely packed up the airplane and got ready to go. No need to preheat or wait for the frost to melt off the wings—that would come later if I took a trip to go big game hunting. I would carry the wing and engine covers and a preheater then. You have to be prepared for snow during most autumns in Idaho.

Starting the engine was the first indication that we were still connected to civilization. I let the airplane warm up and then cycled the prop and checked the mags and carb heat. We were parked on grass, so I didn’t need to do the runup while taxiing.

It was finally time to take off and return to civilization. We had parked about halfway down the airstrip next to some trees, and with a slight downhill incline from left to right, I planned to taxi to the end before starting the takeoff run. The airstrip is plenty long for a midfield departure in my high-performance taildragger with its 180-horsepower conversion, but runway behind you is of no value if you have an emergency. I always use the full length of every runway, except at the 6,000-foot-plus asphalt airports where you can reach pattern altitude by midfield.

It had been so peaceful and quiet that I decided not to break radio silence. We had not seen or heard any other airplanes the entire trip, so I assumed there was no traffic around that lazy Sunday morning. I had heard nothing on the radio while warming up the airplane. That was mistake number one.

I looked both ways before preparing to pull onto the runway. I was thinking more about a stray deer or an elk than anything else, and my runway scan was more out of habit. I looked right, saw nothing; looked left, saw nothing; and then applied power to roll out onto the airstrip to start back-taxiing. That was mistake number two.

As we started rolling forward, I instinctively looked right one last time. In the rare event an airplane was coming in to land unannounced, that would be the only direction from which it would approach.

Holy smokes! Off to the right an airplane appeared on short final and barely five feet off the ground. The airplane was less than 100 feet away from us when I saw it. I jammed on the brakes and held short. The other pilot saw us at the last instant and went around, missing us by a scant 50 feet.

My passenger hadn’t seen the other airplane until I braked hard. He looked at me with panic-stricken eyes. We were so shocked that neither of us spoke a word. I was still trying to decide if the landing airplane was an apparition or the real deal.

Finally, the silence was broken when the other pilot came on the radio and said in a shaking voice that he would circle until we took off. I then made a somewhat high-pitched call to announce that we were back-taxiing for departure. I also announced taking off, and we headed back to civilization, my knees still slightly shaking. I heard the other pilot call out his base and final as we left the area.

I am sure both of us pilots had assumed there was no traffic in the area and had not bothered to use the radio. My airplane probably was partially obscured from the other pilot’s view on downwind by the large Douglas fir trees behind it—but I felt like a fool for not making that radio call and asking if there was any conflicting traffic before I started to taxi onto the runway. I am convinced my first glance to the right had not revealed the landing airplane because it was below the skyline and blended in with the trees.

I am just glad I looked twice before I started taxiing in earnest. I still get goose bumps thinking about how close I came to becoming a runway incursion statistic. It was inexcusable not to use the radio. Now, no matter what, I use the radio when landing or taking off from any airstrip, even if there is no other reported traffic. Only a habitual second look before taxiing saved the day. Please look twice before you leap, and make sure to use your radio as well.

Kurt Becker is a retired biologist who lives in Melba, Idaho. He has more than 17,000 hours of flight time.