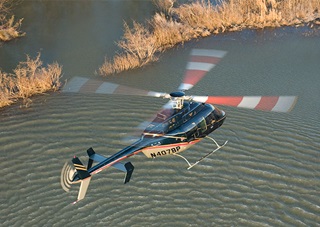 East Hampton, New York, remains keen to limit summer helicopter flights, though local officials may ease their most restrictive measures before putting them to a vote. AOPA remains concerned about the yet-to-be-revealed particulars.

The Long Island town has long chafed at the seasonal proliferation of helicopter traffic, and there’s a long history of litigation, debate, and complaint, particularly when the seasonal traffic spikes in the summer—much of it commercial operators bringing passengers to and from Manhattan. AOPA and other aviation groups met with local officials in February to discuss the town’s latest bid to regulate helicopter traffic through local ordinances.

Councilwoman Kathee Burke-Gonzalez said at a recent local workshop that the most restrictive of those measures, a weekend ban on all helicopters during the tourist season, will not be enacted because of the town’s concern that such a ban would divert traffic to other nearby airports and towns.

Council members, according to Newsday, remain determined to impose curfews, and limit the number of weekly trips by particular aircraft. Restrictions, as discussed to date, would be in place May 1 through Sept. 30. Nothing has yet been presented publicly in writing, though a vote may be taken soon and AOPA continues to watch new developments closely.

Bill Dunn, who has long led AOPA’s efforts to reach workable compromise with the town, said the association is pleased that the most restrictive measures appear to be off the table.

“We’re pleased that the township has responded to the aviation industry’s concerns about limiting operations at the airport,” Dunn said. “But AOPA continues to have concerns about how the final ordinances will come out, and the level of restrictions that will actually be attempted to be put in place in May. We’re not there, yet.”

Dunn said AOPA will continue to seek cooperation, and solutions that address the needs of all.