Get the app Get the app
Already a member? Please login below for an enhanced experience. Not a member? Join today
News & Media Fuel leaks prompt FAA fine 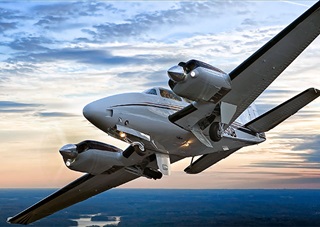 Manufacturing defects led to fuel leaks in 43 Beechcraft Baron twins produced in 2012 and 2013, and the FAA has proposed a $430,000 civil penalty, giving Textron Aviation subsidiary Beechcraft Corp. 30 days to respond.

The FAA announced the decision April 9. An agency spokesperson provided a copy of the letter detailing the alleged violations, but declined to provide additional information.

“I can tell you that we will be communicating with the FAA regarding this, but do not have any comment to provide at this point,” said Textron Aviation spokesperson Lindsay Adrian in an email seeking comment from the company.

The March 23 letter from the FAA to Beechcraft Vice President of Quality Assurance Matthew Chaffin includes no mention that the fuel leaks led to any accident, emergency, or other incident. The FAA noted that federal law provides for fines up to $25,000 for each violation, which would equate to a maximum penalty of just over $1 million for the 43 defective fuel tank installations found by the FAA investigation of field condition reports that first documented the leaks. “After reviewing our investigative file, we would be willing to accept $430,000 in settlement of this matter,” the FAA regional counsel wrote.

The proposed fine is not the largest civil penalty sought by the FAA against a general aviation manufacturer in recent years. In 2011, the FAA proposed a $2.4 million fine against Cessna Aircraft Co. (also a Textron subsidiary) after an FAA production test pilot had to make an emergency landing in a Corvalis when about seven feet of wing skin separated from the forward spar in flight. That problem was also attributed to a manufacturing defect.

According to General Aviation Manufacturers Association data, Beechcraft delivered 59 Barons in 2012 and 2013, 16 more than the 43 aircraft cited in the FAA letter. It is unclear if those 16 aircraft were not affected by the fuel leak, if all 16 were sold in December 2013 (the FAA states in the letter that the defective fuel tank installations affected aircraft delivered between January 2012 and November 2013), if they were delivered and certified as airworthy in a foreign country, or if there is another explanation for the discrepancy.

The fuel leaks resulted from improper installation of fuel bladders, and the FAA cited Beechcraft for failing to maintain the quality control required by its production certificate.