Get the app Get the app
Already a member? Please login below for an enhanced experience. Not a member? Join today
News & Media M600 tops Piper product line 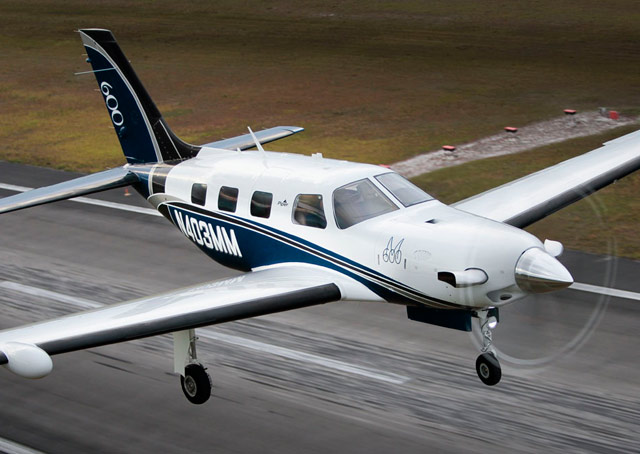 Piper Aircraft upped its game in the single-engine turboprop market April 13 with the introduction of the M600, a higher-performing version of the Meridian. The M600 leads the new M-class series of airplanes, all based on the original PA-46 Malibu. The family now also includes the M500—the latest variant of the Meridian, and the M350, an upgraded version of the Mirage piston-powered single.

Simon Caldecott, Piper president and CEO, says the 700-lb difference allows the PA-46 to move into the class of a true business airplane because it has the payload to accommodate a professional pilot in addition to a reasonable payload for passengers and bags. With that, he sees new markets opening for the company.

The announcements involving the new models came during a gala event at the Piper factory in Vero Beach, Florida, for hundreds of dealers, customers, prospects, and the media. As Caldecott announced the M600, staff pulled a black drape from over a full-scale mockup. As a hangar door next to Caldecott opened the entire company workforce of 800 stood behind one of the three M600 test airplanes, clearly proud of the company’s latest addition. 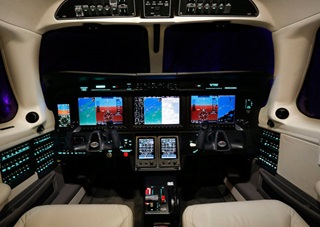 The M600’s improvements in range and payload do not come at a speed penalty. When FAA certification is achieved this fall, the new model is expected to retain the M500’s maximum cruise of 260 knots true airspeed, thanks in part to an additional 100 shaft horsepower from the Pratt & Whitney PT6A-42A engine, the change to a radar pod embedded in the wing leading edge rather than an under-wing pod, and other aerodynamic cleanups.

Besides structural changes, the M600 also includes avionics upgrades, such as the Garmin G3000 cockpit, the first use of the touchscreen system in a single-engine turboprop. The panel change from the Garmin G1000 variants in the other M-class airplanes allowed Piper engineers to further refine the M600 panel with the use of back-lighted placards.

Although the M350 and M500 retain the G1000 cockpit, all of the models include the new lighted placards and a number of additional features compliments of the GFC 700 flight control system. For example, all of the models include Garmin’s ESP—Electronic Stability Protection, which provides flight envelope protection even when the autopilot is off. Underspeed Protection prevents the aircraft from stalling by automatically lowering the nose as needed. An emergency descent mode for the M350 and M600 kicks on when the GFC 700 senses a rise in cabin altitude to an unsafe level, leveling off at a breathable altitude. A Level Mode allows the pilot to return the airplane to straight and level flight with the touch of a button. And, especially important for improving safety during the final critical moments of a low instrument approach, the ability to fly an autopilot-coupled missed approach. At minimums, the pilot can go around without disconnecting the autopilot, although he must still advance the thrust lever or throttle. The M350 also includes a pulse oximeter built into the panel, allowing the pilot to monitor his blood oxygen saturation levels and pulse rate.

All of the M-class airplanes received interior refinements, including USB power ports throughout.

Editor in Chief
AOPA Editor in Chief Tom Haines joined AOPA in 1988. He owns and flies a Beechcraft A36 Bonanza. Since soloing at 16 and earning a private pilot certificate at 17, he has flown more than 100 models of general aviation airplanes.
Go to Thomas B Haines's Profile
Topics: Turbine Aircraft, Aircraft, Aviation Industry