Get the app Get the app
Already a member? Please login below for an enhanced experience. Not a member? Join today
News & Media Apple Watch takes flight 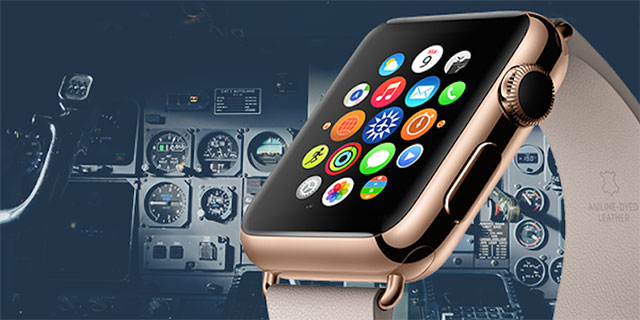 At least two electronic flight bag developers have software ready for the April 24 public launch of the new Apple Watch. ForeFlight and AvPlan each announced similar software strategies to leverage their applications onto the Apple Watch, offering timers, flight notifications, and weather on the wearable computer, which, in the cockpit and elsewhere, functions as an extension of the iPhone.

Apple’s entry into the smart watch market goes on sale April 24 (Apple is already accepting pre-orders), and will compete for customers in a field crowded with wrist-mounted computers. It offers a color, touch-screen display that is able to distinguish different kinds of taps and swipes, and notifications announced to the wearer with varying patterns of subtle taps on the wrist that convey information in themselves—a more sophisticated approach than the familiar, insistent vibration created by similar devices that have already hit the market, such as the Pebble Smartwatch, which is supported by WingX Pro 7, and other devices that have not yet been adapted for aviation-specific applications.

ForeFlight CEO Tyson Weihs said the Apple Watch will launch with a range of applications available, both aviation and nonaviation, that will appeal to a broad range of consumers.

“I think where it is game-changing is it actually will bring wearables to the mainstream,” Weihs said in a telephone interview. It will be “the first consumer device that you can put on your body that you can also install applications on that will be adopted widely. The application ecosystem that gets wrapped around that is what’s really exciting to us.”

While the Apple Watch will offer more capabilities than Pebble (which can be paired with either an iPhone or Android phone, though with some limitations), it will require a smart phone to do more than tell time. Weihs said ForeFlight is highlighting that fact in its marketing message, noting that an iPad will not, for now, be able to support the Apple Watch the way an iPhone can, though that may change in the future.

The first order of business was to figure out exactly what the Apple Watch can do for a pilot.

In their initial software releases for the new device, both ForeFlight and AvPlan (produced in Australia and supported in the United States, Australia, and New Zealand) have arrived at very similar answers: weather, notifications, and timing.

“As we interacted with it, it became clear … we had to focus on a very small number of use cases,” Weihs said, and “not try to do everything under the sun on such a very small device.”

The wristwatch itself came of age in the cockpit, as AOPA Pilot Editor at Large Tom Horne recounts in his recent chronicle of the aviation wristwatch and its storied history dating to 1906. In the beginning, it was all about telling time, and a pocket watch—the mainstream portable timekeeper of the day—was impractical for use in a cockpit. Modern smart watches do that, too, though pairing them with an EFB delivers much more information at a glance, or even without a glance: The Apple Watch can tell the wearer what kind of notification has popped up on the phone by the pattern of taps it generates. Rather than increasing cockpit clutter, the watch is designed to streamline the flow of information and condense it to the most important details.

“We didn’t want to add something that was not really needed in the cockpit,” said Jean-Philippe Hribovsek, ForeFlight’s senior iOS engineer. 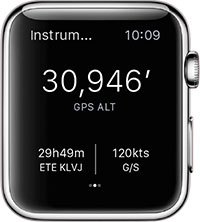 ForeFlight’s development team instead focused on leveraging the watch as an extension of the iPhone, allowing a pilot to keep the phone tucked away in a pocket without missing important notifications and information. A quick glance can reveal the basic weather conditions in the area, or for recent and favoriate airports; time and distance to the next waypoint are just as readily available. Users can set up notifications for important events such as flight plan acceptance (or rejection, as the case may be).

In these respects, the Apple Watch will deliver very similar functionality to the Pebble, or devices like Garmin’s D2—a purpose-built aviation smart watch that offers similar functions. Garmin is not planning to extend the functionality of Garmin Pilot to the Apple Watch, for now. “We will continue to assess whether or not it would be beneficial to do so going forward,” said Garmin’s Jessica Koss, in an email.

Consumer electronics reviews of the Apple Watch (including The New York Times and cNet) note that Apple Watch users may need time to figure out the brand-new interface, and the device (starting at $349) is more expensive than the competition. Apple Watch will launch with some unique advantages, including the touch-screen interface, and a broad range of configurations (including designer models priced at up to $17,000). Like other smart watches, it will keep track of the user's physical activity with fitness applications, and Apple has encouraged development of a broad range of other applications.

“We already have sort of a backlog of things that we’d like to add to it,” Weihs said, adding that the company is eager to hear from customers once the rest of us get a chance to try it out. “Our excitement has built as we have seen how these devices interact and what we can do with them, but we’re always going to be thinking about introducing the right functions … knowing when to say ‘no,’ and what to say ‘no’ to.”

The point, after all, is to free up the pilot’s attention for the task at hand. 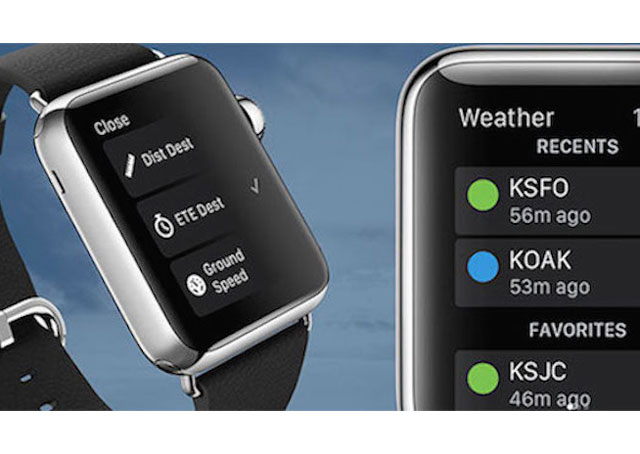