Electroair approved for most of the fleet 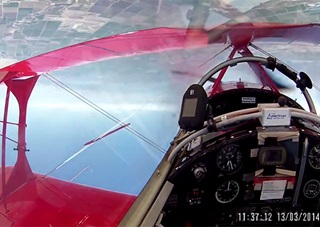 Electroair’s mission to make electronic ignition available across the certified fixed-wing piston fleet is nearly complete, company officials announced April 22. Turbocharged six-cylinder Lycoming engines remain to be added to the far-reaching list of approved aircraft and engine combinations, and Electroair President Michael Kobylik said the next arrivals on the supplemental type certificate and approved model list lineup will be helicopters, starting with the Robinson R22 and R44 models, and expanding to cover Enstrom and Schweizer piston helicopters as well.

The ignition system typically delivers 10 to 15 percent fuel savings, smoother startups, and improved overall performance at a kit cost of about $3,000 for a typical four-cylinder engine and $5,000 for a six-cylinder engine. The kits contain all parts needed to replace one of the two magnetos in each case.

Airshow pilot Spencer Suderman has helped raise the company profile with his highly modified Pitts, which set a Guinness World Record in 2014 making 81 turns in an inverted flat spin from 23,000 feet. Suderman is now aiming even higher, Kobylik said, with a fresh attempt planned May 31 from 27,000 feet over Arizona. Suderman’s Pitts uses the Electroair ignition in place of one of the factory magnetos.

“He’s going for 100 turns,” Kobylik said. “You have to be a little bit crazy. He’s a wonderful ambassador for our product.”

Kobylik said the electronic ignition system—the only one available for retrofits in certified aircraft—is gaining acceptance with regulators and aviators alike. The fuel savings (two gallons per hour in typical six-cylinder engines) have helped overcome skepticism about removing one of the magnetos and replacing it with the electronic system.

“It’s an education learning curve,” Kobylik said. “Once they get over it, boy they’re hooked.”

The company has shipped more than 3,000 kits, including more than 600 for certified aircraft since the first supplemental type certificate approvals were granted by the FAA. Kobylik said a price increase is coming, which will be the first since 2011, though he didn’t announce a new price or when it will take effect.

One remaining hole in the certified fixed-wing lineup will eventually be filled, though engineering has only just begun for an electronic system that can be installed in aircraft equipped with Bendix dual magnetos, a particular challenge since the dual ignition systems operate from a single physical drive. Kobylik said that may apply to as many as 7,000 aircraft, though there’s no way to know how many are still operating.

“We have begun the engineering activity,” Kobylik said. “We haven’t begun the certification process.”