Get the app Get the app
AOPA will be closed July 4th, in observance of the Independence Day holiday. We will reopen at 8:30 am ET on Tuesday, July 5.
News & Media Textron teams with schools 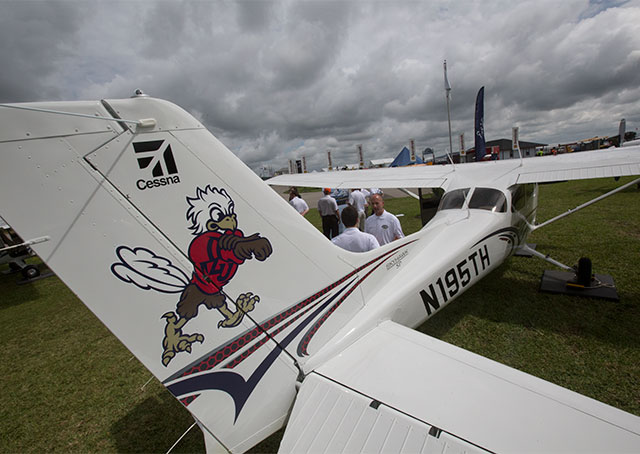 Students at four of the nation’s top aviation schools will get a chance to put hours on brand-new Cessna Skyhawks branded with the school logos and to receive special internship opportunities under the “Top Hawk” program announced April 21 at the Sun 'n Fun International Fly-In and Expo in Lakeland, Florida.

Textron Aviation rolled out a lineup of Skyhawks bearing the logos of Embry-Riddle Aeronautical University, Kansas State University, Liberty University, and the University of North Dakota.

Doug May, Textron’s new vice president of piston aircraft (and a former test pilot), said those schools represent the top-flight of aviation education, and the new Skyhawks—made available for each school to use for the balance of 2015, will help support the larger mission of inspiring the next generation of aviators. The school-branded Skyhawks will be used for flight training, recruiting, and promotional activities. One student from each of the schools will be selected for a special internship, getting an inside look at Textron’s business, leading ground school classes, and building time giving lessons and discovery flights. At summer’s end, the interns will square off in a special aviation competition, putting their skills to the test to be named “Top Hawk.”

The four aircraft will remain on display through Sun 'n Fun before being deployed on their special missions.