Get the app Get the app
AOPA will be closing at 1:45pm ET on Tuesday, December 6th. We will reopen Wednesday morning at 8:30am ET.
AOPA Members DO more LEARN more SAVE more - Get MORE out of being a pilot - CLICK HERE
News & Media ‘An airport to watch’

‘An airport to watch’

A community rallies behind its airport 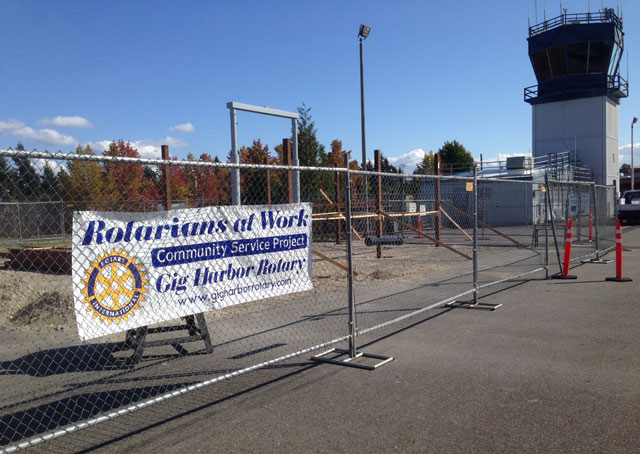 As Tacoma Narrows Airport gears up for an influx of traffic to the U.S. Open Golf Championship in June, the airport community also is making plans to welcome visitors from closer to home. Volunteers are constructing a viewing area and picnic shelter at the Gig Harbor, Washington, airport, so that people of all ages can enjoy the view.

The Rotary Aviation Zone, a wheelchair-accessible observation tower and picnic shelter with picnic tables, is taking shape near the control tower. The product of an effort by the Friends of Tacoma Narrows Airport, the Rotary Club of Gig Harbor, and Pierce County, the area is designed as a place for families to learn more about aviation and connect with their airport community.

It’s also a tribute to the potential for community organizations, businesses, and government working together to change the face of their airport and strengthen its ties to the community. Rotary Club members, county officials, leadership of the Friends of Tacoma Narrows Airport, and the AOPA Airport Support Network volunteer spoke with AOPA April 14 about their involvement in the project, and how they combined their enthusiasm for the airport with their skills to create an inviting, educational space for the public.

“From my perspective, I am a grandparent. I bring my grandchildren here to watch airplanes,” said Gruener. “This provides a very welcoming area to do that.”

This became a key project for the newly formed Friends of Tacoma Narrows Airport, and caught the attention of the Rotary Club of Gig Harbor. At first Gruener thought a play structure would be a great way to bring parents and kids to the airport, he said, but the idea was refined to an educational viewing area because of limitations on how airport property may be used.

Pilot, architect, and longtime Rotary Club member Jim Castino saw an opportunity to combine his aviation background and architectural background for the project. He helped develop a proposal that fellow Rotary Club member and local business owner Brett Marlo DeSantis presented to the Gig Harbor Rotary Club in November 2013. The Rotary Club contributed $25,000 to the project as well as volunteer labor—well over 1,000 man-hours of construction work so far, estimates Randy Barcalow, a Rotary Club member who serves as site manager and oversees construction. Castino designed the tower, with the idea of making it look like a control tower: raised a few feet off the ground to give adults and children an opportunity to see what’s going on at the airport, and handicap-accessible. 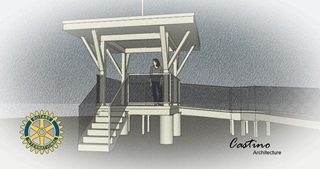 “The whole idea is to develop a family-oriented viewing area, easily accessible for seeing what’s going on at the airport,” he said.

Organizers plan to pipe in radio transmissions from the control tower to give spectators the full aviation experience, and the incorporation of salvaged aircraft parts such as propellers into the design of the picnic shelter will contribute to what DeSantis, who has been involved in conceptual design and site planning, called the “sense of place.” Further plans call for signage and potentially a full-size aircraft on display, after the initial structure is complete and as funding and a donated aircraft become available.

Area businesses have already chipped in on the project, from providing pizza for build days to the propellers for the picnic shelter. The restaurant on the airport, Hub Restaurant at Gig Harbor, agreed to make its restrooms available to the public, a requirement for permitting.

Alongside this community support of the project was the critical support of county government. While some local governments around the country have neglected or even become hostile toward their community airports, Pierce County has invested in its airport. The county bought the airport from the city in 2008 and committed to revitalizing it, knowing the U.S. Open was coming in 2015.

The county worked through challenges in the permitting and approval process, providing the FAA with assurances on how the site would operate. If the space is needed for aeronautical purposes, for instance, the structure will be moved at the county’s expense. The county also coordinated with local companies to garner support.

Airport and Ferry Administrator Deb Wallace puts the project in the context of a multi-year revitalization of the airport, which recently rehabilitated the runway and has been making other improvements. While operations declined with the economic downturn, they’ve bounced back, increasing significantly since 2012, she said. AOPA Airport Support Network volunteer Warren Hendrickson, who previously worked at the airport as a planner, added that the airport has a lot to recommend it: It’s the only towered airport in Pierce County, has ILS approaches to both runways, and offers Jet A fuel.

Those assets will be particularly beneficial when the airport welcomes traffic for the U.S. Open, but the airport also is becoming a popular fly-out destination. Locals have cast the airport as a gateway to the South Puget Sound as a way to invite pilots and their families to visit.

“This is going to be an airport to watch,” Wallace said. 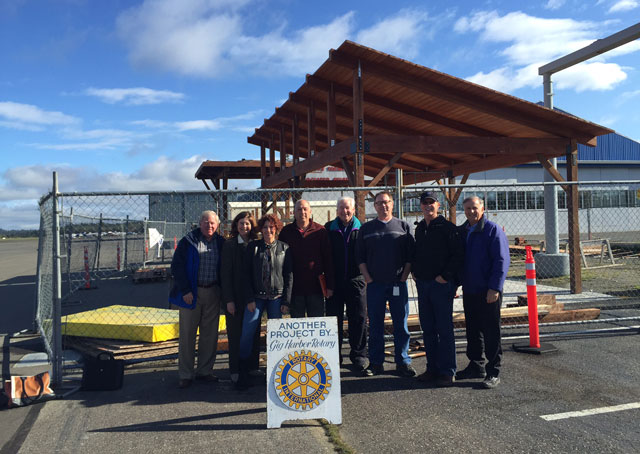