Get the app Get the app
Already a member? Please login below for an enhanced experience. Not a member? Join today
News & Media Jeppesen Mobile FliteDeck VFR adds audio warnings

Version 2.1 of the iPad app, due out in early May, connects to headsets via Bluetooth for the alerts, Jeppesen announced April 23 at the Sun ‘n Fun International Fly-In and Expo in Lakeland, Florida. Jeppesen touted the technology’s ability to enhance pilot workflow and reduce “head down” time while using the app.

The audio warnings expand on visual airspace warnings added to the VFR app in 2014. The new feature uses “ping” style sounds and the word “airspace” to alert pilots of current airspace details when they are flying in and near controlled airspace, according to Jeppesen. If the pilot has defined route waypoints, similar audio and visual waypoint alerts are available. Pilots may choose which audio alerts they receive. 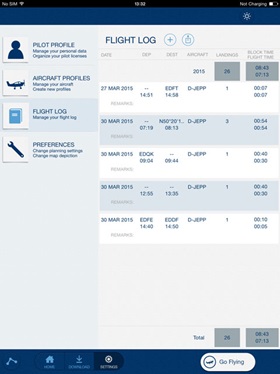 While the app is designed to work with the Sennheiser S1 Digital headset, Jeppesen’s Reggie Arsenault explained that it also will work with some other headsets. Jeppesen said that the Sennheiser headsets will guarantee information prioritization, which distinguishes important inputs such as radio communication from unimportant input such as music, and accurate audio operation.

Additional features announced at the show include automatic flight time logging. The automatic logbook uses details from GPS input, pilot routing, and other sources to populate the logbook; those fields may be overwritten by the pilot. Jeppesen Mobile FliteDeck VFR is available for a $49 annual subscription or as a free 30-day trial.