Get the app Get the app
AOPA Members DO more LEARN more SAVE more - Get MORE out of being a pilot - CLICK HERE
News & Media Training Tip: No way out but down

Training Tip: No way out but down 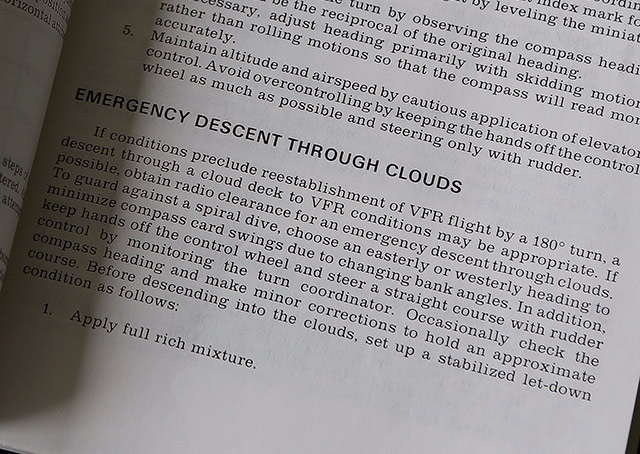 The April 24 “Training Tip” presented the Private Pilot Practical Test Standards task known as the emergency descent, a maneuver designed to help you land quickly in the event of an in-flight occurrence like a fire. A nuance of the maneuver is performing it in a turn to maintain a positive G load on the airframe.

There is another scenario that could present a student pilot or noninstrument-rated pilot with the need to descend under emergency conditions—but the reason for doing so and the technique differ from that described above. Nor does this second scenario result in an immediate landing.

The maneuver is the emergency descent through clouds to visual flight conditions. It too is a legitimate emergency, even though nothing is on fire and the aircraft is running perfectly. That’s because a noninstrument-rated pilot in instrument meteorological conditions is seriously over-matched. Accidents arising from this scenario tend to be lethal, making avoidance the only reliable defense.

Still, pilots who fly into obviously deteriorating weather don’t always land or turn around in time. Then they may find themselves aloft above a solid overcast with no way out except by using their minimal skills at emergency flight by reference to instruments to descend to clear conditions. In many cases, the calm and reassuring assistance of an air traffic controller helps achieve a safe outcome.

Several simple but crucial elements of the technique will keep a bad situation from progressing to loss of aircraft control as outlined in the pilot’s operating handbook for your aircraft.

The maneuver checklist for a 1978 Cessna 152 calls for making the descent with power reduced for a 500-fpm to 800-fpm descent rate. Guard against a spiral dive by choosing “an easterly or westerly heading to minimize compass card swings due to changing bank angles.”

Avoid over-controlling by steering a straight course with rudder only, keeping hands off the control wheel. (Be sure to practice this during your dual simulated instrument training, noting how it helps ward off vertigo, and to gain confidence in the method.)

This gradual, straight-ahead descent is very unlike the rapid, turning emergency descent previously considered. However, both tasks rely on specialized techniques and a delicate combination of pilot aggressiveness and restraint.

Promise yourself never to be in a position to need a descent to VFR through clouds. But arm yourself with the knowhow, as a prudent pilot should.