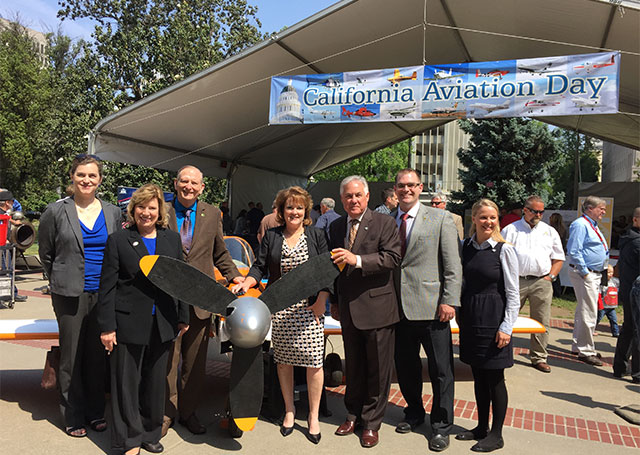 California benefits from a strong airport system, and that system generates fuel-tax revenue that should go to the support of aviation infrastructure, two members of AOPA’s state government affairs team said in testimony before a state Senate committee.

Jared Esselman, AOPA director of state government affairs, and Melissa McCaffrey, AOPA’s Western Pacific regional manager, testified to the importance of general aviation, and the need for a reliable source of state funding at a Senate Transportation and Housing Committee hearing April 21 on Senate Bill 747 in Sacramento. Their committee appearance was part of AOPA’s close engagement on behalf of members with California state legislators and policymakers that also included an Aviation Day event at the Capitol and one-on-one meetings to highlight general aviation’s contributions to the state.

The AOPA staff members and team of airport managers made contact with every state legislator’s office to promote Senate Bill 747 prior to the hearing and during the Aviation Day event on April 22, Esselman said. The bill would require revenue from the state’s fuel taxes to be transferred to aeronautics accounts "for allocation in specific percentages to airports and for aviation-related purposes."

Dan Namowitz has been writing for AOPA in a variety of capacities since 1991. He has been a flight instructor since 1990 and is a 35-year AOPA member.
Go to Dan Namowitz's Profile
Topics: Advocacy, Taxes