Get the app Get the app
AOPA will be closed July 4th, in observance of the Independence Day holiday. We will reopen at 8:30 am ET on Tuesday, July 5.
News & Media Pilots scour the sea for missing Florida teens 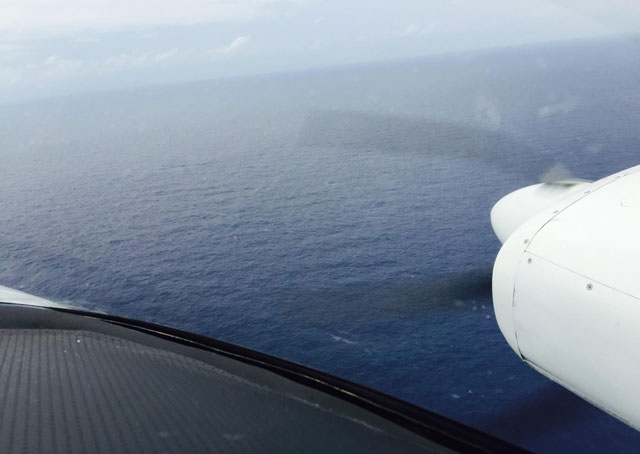 They flew the Cessna 310 a few hundred feet above the water, eyes straining for detail amid a vast blue stretch of ocean waves.

Kacper Gradzki, owner of Jacksonville Flight Training in Jacksonville, Florida, volunteered his aircraft and his time, joined by three fellow volunteers for the first of two patrols on July 31. That was the same day the U.S. Coast Guard suspended its own search for two missing teens who set out on a fishing trip July 24 from which they have not returned. Gradzki and fellow volunteers flew a second mission Aug. 2, searching for Austin Stephanos and Perry Cohen, whose 19-foot boat was found capsized on July 26, 65 miles from shore. A Coast Guard rescue swimmer found no sign of the boys. Other vessels in the area when the pair embarked had reported severe storms.

Anyone who has children, Gradzki said, “can imagine what it would be like.”

The family has raised more than $500,000 through local fundraisers and an online campaign, according to local media; thousands of people from across the country have contributed time, money, and specialized skills, scouring coastlines and off shore. The Palm Beach Post reported Aug. 4 that life jackets had been found on a sand bar 20 miles from the Georgia coast, though it was not clear if they had any connection to the missing boys.

Paul Robinson, who is organizing logistics on behalf of the families, said Aug. 5 that the life jackets had not been linked to the boys’ ill-fated fishing trip, and were among many discoveries that prompted investigation.

“Some of them are just red herrings and we’re putting the family through this emotional roller coaster,” Robinson said.

Gradzki said two flights in the Cessna 310 turned up no sign of the boys, though he and fellow volunteers did spot a sea turtle, a bucket, a small balloon, and a dolphin, so he’s reasonably confident that had there been something to see in that particular stretch of ocean, they would have spotted it.

Gradzki declined offers for compensation from the fund established by the families, saying he and the others “just wanted to go out there and basically at least do something … even though there’s a slim chance.”

Gradzki’s flight obtained VFR flight following from offshore controllers, though few other aircraft were operating in the vicinity, he said. The Coast Guard search had covered 50,000 square miles of ocean by the time it was suspended at sunset on July 31. The Palm Beach Post reported Aug. 3 that various pilots have stepped up to participate in the now-private search. Actor John Travolta donated the use of an Eclipse jet to take high-resolution photographs that were provided to the Maine-based nonprofit Down East Emergency Medical Institute, which has been assisting in the search, with volunteers analyzing thousands of images.

AOPA’s Pilot Information Center has fielded calls from members eager to participate, though pilots who do not hold commercial pilot and operating certificates could run afoul of FAA regulations restricting flights for compensation or hire under Part 91. The agency has interpreted the prohibition to apply to various scenarios, including flight-sharing and aerial photography. Pilots, particularly those who do not operate under Part 135, should carefully consider the complex legalities and their own certifications before participating in the search.

Robinson said he was working to secure the services of aircraft equipped with infra-red cameras, and hoped to cover defined areas of ocean between Jacksonville and Cape Hatteras, North Carolina, on Aug. 5, taking advantage of a break from adverse weather. Where the search will go from there will depend on a number of factors, he said. Those seeking an opportunity to volunteer can contact a 24-hour call center at 352/222-3314.

Gradzki said hours spent over the ocean convinced him that a life raft is essential equipment, in addition to life jackets.

“If you’re going to be ditching out there, you’ve got to have a raft,” Gradzki said. “Your chances of getting picked up are increased substantially with a raft.”