Get the app Get the app
News & Media P&E: On Instruments

The procedures for dealing with lost communications when IFR are set down in FAR 91.185, but you might be able to avoid the pressure of having to immediately recall them when the heat is on.

Is anybody out there? 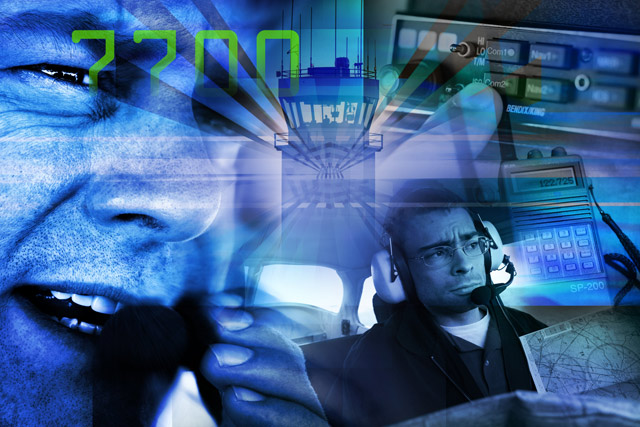 There’s always a bit of tension when you’re flying in actual instrument weather. You’re trying to be as precise, disciplined, and safe as you can, so the last thing you need is a major curveball—especially when ceilings are low and visibilities rotten. This is no time for something as stressful as a loss of communications, but it happens. Thankfully it’s rare, but we’ve got to be prepared.

The procedures for dealing with lost communications when IFR are set down in FAR 91.185, but you might be able to avoid the pressure of having to immediately recall them when the heat is on.

One obvious alternative is to keep a handheld transceiver aboard. This can be a great way to work around any panel-mount com radio problems, but there are some caveats. A major limitation is the handheld’s integral, “rubber duck” antenna. Simply put, these antennas can’t push a signal outside the airplane. For a handheld to work with any real degree of success, it must be connected to an external antenna similar to those used by panel-mount radios. This means a dedicated antenna installation, with a cockpit coaxial cable connection to the handheld itself. But even with this ideal setup, transmission range is nowhere near that of a panel-mount com radio’s.

The handheld also must have cable connectors for your headset’s microphone and speaker plugs. (Without a connected headset it’s unlikely you’ll be able to make out any transmissions from a handheld.) Oh, and the handheld’s battery must be charged, or it must receive power from an airplane electrical bus.

No handheld? All may not be lost. First, dial up the volume on your com radio(s), and adjust the squelch; it may be a matter of the volume being too low and/or the squelch set too high. Or the audio panel may be the culprit. Make sure it’s on, that its volume controls are turned up, and you have the proper radio selected for transmitting and receiving. These are simple checks for simple problems. Hopefully you’ll be rewarded with a reassuring—and no doubt super-loud!—confirmation that ATC hears you, and vice-versa.

If not, then the first step is to squawk 7600, the code for lost communications. And make sure the transponder is set to the On, or On/Alt position. Now ATC has been officially notified and the next steps can be taken.

Let’s say you can receive ATC, but can’t transmit. Controllers should have noticed your silence, and they may well ask if you hear them. They may give you discrete transponder codes after posing questions such as “November One-Two-Three-Four-Five, do you read me? If so squawk One-Two-Three-Four.” By dialing in a specified code, you can also respond to other yes-and-no questions as well as acknowledge clearances and maybe even receive a rerouting to the nearest airport experiencing visual meteorological conditions—if this option is offered.

If you can’t hear ATC then you obviously don’t have the luxury of knowing whether they receive your transmissions—so you’re pretty much in the dark in this case. Still, you may have an out. Try listening to VOR frequencies with voice capability. Try communicating over flight service station frequencies. Try contacting other nearby aircraft. (By the way, if VFR conditions are encountered, continue under VFR and land as soon as practicable. Then call flight service and tell them you’re on the ground.)

FAR 91.185 gives lost-com guidance according to route, altitude, and clearance limit. Because memories are taxed when under stress, consider carrying a summary of these rules. But even memory aids can fail if you don’t keep track of your clearances. In other words, write them down as they are issued.

When it comes to the route to fly, go by the route you were last assigned before the communications failure occurred. If you were being vectored to a fix, then fly direct to that fix or other clearance limit. If you were told to expect a certain routing, then fly that routing. Finally, if none of the above apply, fly the flight-planned route you filed.

Now let’s say you’ve been given an expect further clearance (EFC) limit time. Perhaps you’ve been issued holding instructions with an EFC time, and you lose communications after entering the hold. In this situation, leave the hold at the EFC time. Didn’t receive an EFC time? Then leave the holding fix or other limit the moment you cross it. Now you can proceed via the route and altitude rules mentioned above while on your way to your destination airport’s initial approach fix (IAF). Still no communications at the IAF, and no EFC? Then begin the descent for the approach—in a holding pattern if need be, with turns on the same side as any published procedure turns or course reversals—at your filed or amended estimated time of arrival (ETA).

Still no communications, and the destination airport is drawing near? Again, if you were given an EFC time for leaving an IAF, then leave it at that time. If you did not get an EFC time, then begin your descent—or descent and approach—as soon as possible to the filed or amended ETA. Which you did write down, yes?

Wait a minute, you say, we’ve been talking about IAFs and descents for the approach, but which approach? The answer is easy to remember: any approach you choose! Because you have lost communications, the airport is all yours. ATC has held all traffic so that you can land.

Reader Don Pedrazzini wrote me recently with a lost-com question relating to my September 2015 “On Instruments: Becoming Altitude-Aware.” He flies out of Santa Rosa, California, to Southern California, and often there’s a shallow local marine layer he needs to climb through before continuing in VFR conditions. So he files an IFR flight plan asking for a clearance to VFR conditions on top. The clearance is always, “Cleared to the Snupy intersection via the Santa Rosa Eight departure, climb to and maintain 3,000 feet. If not on top by 3,000 feet, maintain and advise.”

So Don, a retired 33-year airline pilot, began to wonder about a potential lost-com dilemma that’s relevant to this month’s discussion. “What would I do if I lost comm after takeoff and was still IMC at 3,000 feet when I got to Snupy? At this point I have a clearance limit—Snupy intersection—and an altitude. I have no EFC time or clearance to a higher altitude.”

Here’s what Don said he’d do. “I’d squawk 7600 and fly the departure to Snupy, enter a standard holding pattern, and start a climb to VFR conditions. I would fly to a local airport that was VFR, one without a tower, and call Oakland Center and tell them what happened.”

Data from Nasa’s Aviation Safety Reporting System shows more than half of all communication problems are caused by pilots selecting incorrect frequencies.

Leave clearance limit:
• If IAF: at EFC time, if received, or else per flight plan ETA
• If not IAF: At EFC time, or else proceed to IAF, descend for approach at ETA

Should you encounter VFR conditions: Continue under VFR and land as soon as practical.