Get the app Get the app
AOPA will be closed July 4th, in observance of the Independence Day holiday. We will reopen at 8:30 am ET on Tuesday, July 5.
News & Media Market Report: Ups and downs

It almost seems natural that when worldwide climates are at their respective extremes, so are the seasonal sales cycles. 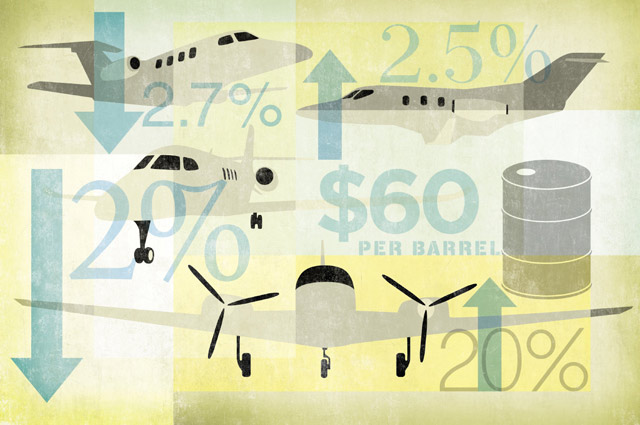 In the aircraft sales business, summer in the northern hemisphere signals the beginning of what is typically a hot buying/selling season, complemented with an increase in flying as owners, along with family and friends, venture out for vacations worldwide. It almost seems natural that when worldwide climates are at their respective extremes, so are the seasonal sales cycles.

Although inventory levels are higher, we still see that the preowned turbine aircraft market is pumping on all cylinders. Residual values are holding strong, banks are lending, manufacturers are releasing new products, and the idea of someone owning and operating a private aircraft has lost a bit of the taboo that was so unfairly attached to the concept following the 2008 “big three” auto manufacturers’ faux pas of flying into Congress with their Gulfstream jets to ask for government bailouts.

Over the past few quarters, we’ve observed two major factors affecting the preowned turbine aircraft market: The new reality of oil pricing and the strengthening of the U.S. dollar against many of the major international currencies. After what has been a shell-shocking year on oil pricing, at the time of this writing, West Texas Intermediate crude oil was holding fairly steady at around $60/barrel, where it has been since early April of this year, proving to be short-term good news for the aviation business because the oil and gas sector represents a significant generator of preowned aircraft demand.

Meanwhile, the U.S. dollar continues to trade strongly against the euro, yen, and Brazilian real—continuing the global pricing wars driven by the fact that aircraft typically trade in dollars. This factor has also kept the net import/export of aircraft in a United States-bound direction from other countries. We here in the United States have seen great values on aircraft in Europe and South American countries, although the process of importing and ferrying them to the United States detracts somewhat from the appeal.

Outside of the global factors, the industry continues to move forward on new products. Piper announced its updated version of the Meridian, the M600; both Cirrus and HondaJet are steadily marching towards certification of the Vision jet and the HondaJet, respectively; Textron Aviation recently received FAA certification on its mid-size Latitude; and Embraer is fighting for share with its Phenom 100 and 300 jets. This equals healthy competition for the hard-earned spending dollar and the release of preowned aircraft as buyers step up the ranks to new products.

The “step-up” from one aircraft to another is the primary driving force in the light turbine market. A majority of light jet buyers are coming from turboprop aircraft and some high-performance pistons, and with light jets having come into grasp for more buyers (in many ways—acquisition cost, fuel cost, simplicity/similarity in avionics, just to name a few), we see an interesting story told by the latest market trends: Compared year over year, light jet inventory levels are down 2 percent whereas turboprop levels are up more than 20 percent.

All this said, we are in exciting times with the aviation industry right now, and there is plenty to look forward to in the near future.

The peak sales season for 2015—for most sellers, at least—couldn’t have arrived with better timing. While transactional volume is up year over year, the rate at which aircraft are coming to market is outpacing the number of sales, resulting in an overall net increase of inventory levels.