Get the app Get the app
AOPA Members DO more LEARN more SAVE more - Get MORE out of being a pilot - CLICK HERE
News & Media High Hopes program: ‘You can’

High Hopes program: ‘You can’ 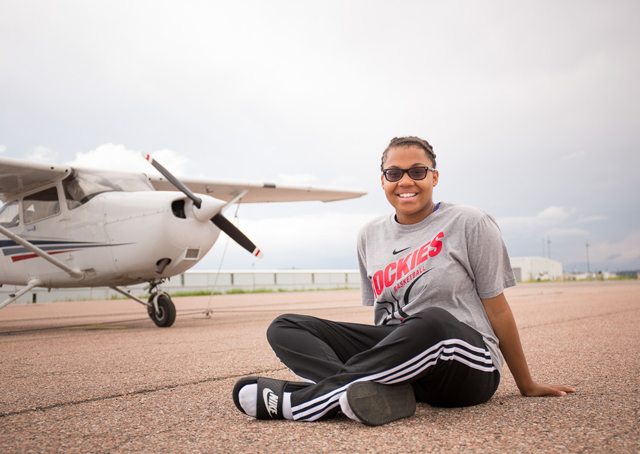 At 16, Amanda Robinson is considering ambitious options for life after high school.

“Right now it’s like, ‘Doctor, flight, Army,’” said the Colorado Springs teen of the potential career paths she’s considering. An Air Force Junior Reserve Officers’ Training Corps cadet and National Honor Society member, Robinson also is learning to fly through High Hopes for Teens, a program designed to open the eyes of at-risk and disadvantaged youths to what they can achieve.

“I just love everything about it,” said Robinson, who learned of the program through her involvement in JROTC and is training alongside two fellow cadets. “It’s really cool. It’s something not a lot of people can do.”

Convincing teens and wounded veterans that they can—not only fly but achieve their dreams—is the central purpose behind the High Hopes for Colorado nonprofit, run by the owners of Peak Aviation Center at Colorado Springs Municipal Airport. Veterans in the wounded warrior program may either take an orientation flight with their family or progress through flight training toward their certificate. Teenagers may participate in an aviation orientation or private pilot training.

Two teenagers have earned their private pilot certificates through the High Hopes for Teens program, one who went on to the Air Force Academy, according to Al Mathews, co-owner and vice president of the flight school and director of its High Hopes programs—but the benefit of the program goes beyond certification.

“Our intent is not to create pilots,” Mathews said. “What our intent is—to tell these kids in these challenged environments that they can. Whatever their goals are, pursue it and they can achieve their dream.”

Some youths have come to the program through juvenile detention centers, Mathews explained, citing two who credited High Hopes with getting them out of their rut: One went on to pursue a culinary career, and another is working as a security guard while going to night school for law enforcement, he said. Some High Hopes participants come out of a difficult home environment; others face the challenges of being a minority growing up in the wrong part of town, he added. Robinson goes to a school that not long ago had a graduation rate of 65 percent, he explained.

Robinson said she had been interested in flying but didn’t think she’d be able to do it until she went on a field trip and got a chance to take the controls. With about nine hours in her logbook in June, Robinson had worked on turns, touch and goes, stalls, and getting used to the feeling of G forces. “Turns, I feel like, are the easiest,” she said. “They come the most natural to me.” In July, she flew 10.2 hours through the Legacy Flight Academy in Tuskegee, Alabama, Mathews said.

Participants come to the High Hopes for Teens program by recommendations from social workers, teachers, or other qualified sources. Some, like Robinson, were referred through JROTC, and the Sachs Foundation, an organization that provides support for black Coloradans, funds several students’ training. Peak Aviation Center Owner and President Pat Carlile said the High Hopes program keeps costs down by using donated training materials from Jeppesen, training in the Flight Design CTLS light sport aircraft when possible, and using an aviation medical examiner who performs the students’ exam for no charge. The nonprofit also raises funds from donors such as USAA and a golf tournament in the summers, he added.

High Hopes teens go through a screening process before they may qualify for the free flight training the program provides, Mathews explained. Students answer questions about why they want to fly and the positive aspects of their life in an application process, and they must sign a contract agreeing to show up for lessons, keep good grades, stay away from drugs and tobacco, and stay out of trouble, he said. Parents also must sign off on the endeavor.

Five teens are currently training in the High Hopes program, according to Mathews, with applications for two more. Robinson is progressing with her eye on her goals for the future, as well as some additional motivation through a friendly rivalry with one of her fellow JROTC participants, she said: “We’re always trying to be better than each other.”