Get the app Get the app
AOPA will be closed July 4th, in observance of the Independence Day holiday. We will reopen at 8:30 am ET on Tuesday, July 5.
News & Media Celebrate 2015 National Aviation Day

This year, aviators are planning to celebrate the special day by flying to favorite destinations, sharing aviation with friends and family, or by visiting U.S. aviation attractions.

Private pilot Kevin Coughlin, who is based at Republic Airport on New York’s Long Island, said he plans to take his wife, Joelle, and their pet pug Frank on a nearby sight-seeing trip to Block Island in their Cessna 150.

“There’s a very nice restaurant on the field called Bethany’s Diner. Afterwards, we usually take a taxi into town and rent a moped. There’s three lighthouses on Block Island and last time we got to see all three within the hour, then we flew back home. It’s a beautiful view with oceans all around you,” said Coughlin.

If southern thunderstorms don’t interfere with his aviation, Rusty Jarrett, a radio controlled pilot in Augusta, Georgia, will likely be celebrating aviation day by flying his 50cc Yak from a turf runway at Edgefield County Airport in Trenton, South Carolina. Jarrett said he enjoys the camaraderie RC pilots share with general aviation pilots using a pair of grass landing strips at Edgefield County, which is listed for RC operations in the airport/facility directory.

“Pilots fly in early on weekends to practice touch and goes so I sat there last Saturday and watched for about 10 minutes while a home built and a Cessna 152 practiced their landings. Then we pulled out our RC planes and went flying for a couple of hours until it got real hot. We can fly [at the field] until a full scale is in the pattern, then we land until they are off of the runway. It’s just a very special place since the full scale guys and ladies there all like RC flying,” said Jarrett.

Aviators lacking access to either full scale or RC airplanes also have options to help them celebrate National Aviation Day.

The First Flight Society and the National Park Service are teaming up for free admission to the Wright Brothers National Memorial on North Carolina’s Outer Banks where the historic 120-foot-long first flight took place Dec. 3, 1903, with Orville at the controls and Wilbur watching from the sand dunes of Kitty Hawk. Interpretive programs examine the brothers’ glider experiments and aircraft replicas while coastal winds should help lift off a special kite-making demonstration. 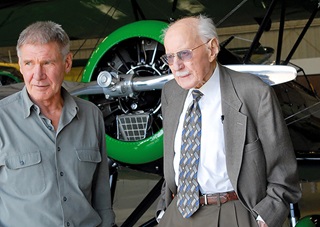 The Smithsonian Air and Space Museum in Washington, D.C., will host a free movie screening of Flying the Feathered Edge: The Bob Hoover Project, at 7 p.m. to honor aviator Bob Hoover. The Air Force fighter pilot, experimental test pilot, and airshow favorite, has delighted countless audiences with engine-off loops and rolls in an Aero Commander twin. Hoover helped usher in the jet age and the 93-year-old pilot will be saluted for “preserving the opportunities of aviation, and keeping young people involved and interested in aviation and aviation careers, both for themselves and for the benefits it brings to our society at large,” said Harrison Ford, during an on-screen interview about the film.

Moviegoers visiting the nation’s capital can stop by the Smithsonian’s Airbus IMAX Theater to view Brian J. Terwilliger’s short film, Living in the Age of Airplanes, narrated by Ford, for a small fee.

NASA suggests visiting airport parks and science museums to help celebrate National Aviation Day without spending a fortune. The space agency that both explores the galaxy and studies hurricanes back on earth, encourages pilots to go airplane spotting at local airfields, build airplanes themselves, or at least spread their arms wide and pretend to soar like an airplane.

GA pilots could celebrate the occasion by going flying or taking someone up for his or her first flight, or by going up for a  flight lesson to brush up on skills, train for a new rating, or knock the rust off their pilot certificate. Future aviators interested in learning more about flying can reach out to their local flight school to schedule an introductory flight of their own.