Get the app Get the app
Already a member? Please login below for an enhanced experience. Not a member? Join today
News & Media Racing ‘like Superman’

As agile as hummingbirds, though not nearly so precise, drones barely big enough to cover a dinner plate (and some smaller still) raced through hoop gates and around sponsors’ flags as a small crowd cheered and groaned in turn. Cheers were for a well-flown race, and simply finishing was often enough to qualify. Groans followed the hollow thwack of composite and battery meeting gate or flagpole, the drone dropping to the ground like a stunned bird. One strayed too low and cartwheeled about 30 feet along the ground before re-launching in hot pursuit of the new frontrunner.

At the finish line, Will Martins of NEFPV, gamely attempted to keep his commentary over loudspeakers on pace as the tiny aircraft zipped around the course. In his voice there was sometimes a touch of pity for a veteran builder who has spent dozens or even hundreds of hours building the tiny race craft, only to see it tumble out of control scattering propeller blades in the grass.

There were no stopwatches in sight. Martins relied heavily on each pilot’s spotter to report laps completed. He is among a loose-knit group of hobbyists based in the Northeast who build and fly drones equipped to transmit first-person video views to pilots with remote controls in hand. Many sit in lawn chairs, still as statues as their copters race at speeds approaching or exceeding 70 mph, showing few outward signs that there is much going on behind the goggles.

“It is so cool. You really can’t appreciate what an immersive experience it is until you’re behind the goggles, and you’re going through those hairpin turns,” said Warlito Pajarillaga, known in the NEFPV community and the wider online world of drone racing as “Mochaboy.” He authors a blog full of detailed how-to guides for building, operating, and repairing first-person view drones.

“It’s an out-of-body experience. It’s the closest thing to flying like Superman, you know, without actually being Superman,” Pajarillaga said. 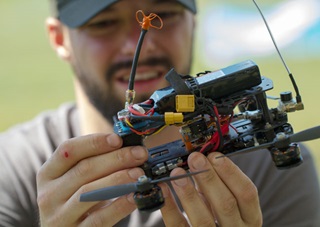 Under the shade of the registration tent, a cluster of flat screen monitors mounted on plywood carried video feeds streaming from the drones through a tangle of wires. These tiny televisions may one day grow into stadium-sized displays, giving a pilot’s-eye-view to thousands at a time. Promoters and investors (including Miami Dolphins owner Stephen Ross, whose RSE Ventures has committed $1 million to the startup Drone Racing League, according to ESPN) hope that first-person views will draw crowds to drone racing in the same way it has allowed auto racing promoters to take fans around the track in real time. That first-person view could also be fed through goggles worn by spectators; it is the key ingredient to making the sport watchable, since a six-inch quad moving at 70 mph is about as hard to follow as a fast-moving insect.

Volunteer organizers of NAFPV2015, the North American FPV Meet held in Stephentown, New York, had registered nearly 100 pilots and 50 spectators on Aug. 14, the second of four days on a rented the golf driving range that became an encampment of tents, worktables, and enthusiasts. Serpentine courses marked by flags, padded half-hoops just tall enough to walk under at their apex, and small plastic cones were laid out on the grass. Sponsored banners lined the start/finish area, and music played between organized heats and during free-flight sessions. Pilots signed up for time slots, claiming tags that entitled them to use particular frequencies to prevent interference. While radio channels were carefully allocated, there was nothing resembling air traffic control procedures in effect. Piloting a very expensive hexacopter, Rita Ainane, a mechanical engineering student at MIT working with fellow students Reo Baird and Phil Gauthier to fine-tune a prototype drone controller designed with professional filmmakers in mind, watched small aircraft circle with a wary eye, noting the goggle view limits peripheral vision, and FPV pilots are hard-pressed to avoid collisions with anything not directly in their path. Best, she said, to stay clear of the racetrack. 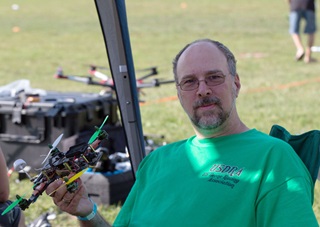 “That was a little close,” said Dave Shevett, chairman of another nonprofit group, the US Drone Racing Association,  watching an air traffic controller’s nightmare in miniature from a lawn chair next to the course. Shevett has embarked on an effort to bring organization and standards to the sport, and help the disparate organizations and individuals connect, coordinate, and codify. It’s been an uphill battle.

“Fragmenting is a real problem,” said Shevett, noting that NAFPV2015 is “one of the best-organized” events, though like the others it is not sanctioned by a national or international body or governed by widely accepted rules. For example, Shevett said, there are no limits on battery capacity that could be used to organize racers into evenly matched classes.

“It’s the nature of FPV racing, which is really still just a hobby,” said Bruce Freeland, who has established a blog about FPV racing, in an email exchange. “Standardizing rules will help move FPV racing forward as a sport and I think the community in general is interested in that progression. Look for drone racing to develop along the lines of auto racing: Eventually there could be many leagues, from amateur to professional, covering a whole spectrum of drone set ups (like you see in the differences between NASCAR, WEC, Formula 1, etc.).”

Shevett winced at another mishap out on the track. 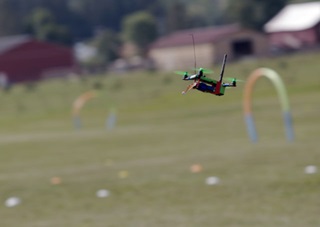 “We’re nowhere near that,” he said of FPV racing as an organized sport. “This entire sport is less than a year old. The really serious stuff is more like six months” old.

Within those six months, sponsored events have been held in California and Arizona, drawing spectators, media coverage, and sponsors. The leader of a group of five marketing and production professionals, John Caldwell, said Drone Wars (the aforementioned Arizona event held in June) drew a crowd including executives from traditional action sports sponsors.

“We created an event that drew over 600 people,” Caldwell said in a telephone interview in June. The organization is planning an even larger event in October, and has ambitions far beyond local races. “We’d like to create a national circuit. We think we have the ability to promote and build the brand as well as anybody else out there.”

The Fédération Aéronautique Internationale, which sanctions international aerial sports and records, announced in June it is working with organizers in member nations to develop rules for formal drone competitions. 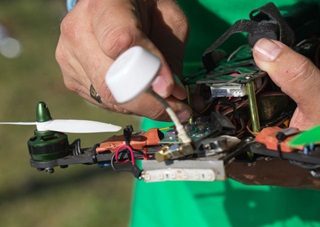 Advances in technology have put FPV video within the reach of people with a few hundred dollars to invest. Pajarillaga, who has devoted hundreds of hours to learning by trial and error, is one of the online leaders of the community eager to share hard-won knowledge and ease the path of newcomers. He gave an impromptu seminar under the tent where pilots are briefed, detailing his own progression from fixed-wing FPV craft to ever-smaller quads.

“For somebody who came with a checkbook, you could spend $1,000 and be set for the rest of your building career,” Pajarillaga said. “It gets cheaper after that.”

A quadcopter kit can be bought as such, or ordered in individual parts, costing a from around $300 for a basic racer to $700 or more for more advanced models. Pajarillaga said an aptitude for engineering and electronics comes in handy, though he and others in the community are willing and able to share their knowledge and help aspiring hobbyists get through the “tough parts” of a build. He spent about 400 hours building his first drone, and about six hours on the most recent assembly.

Building the drone is one thing. Getting it airborne, and keeping it there, are quite another.

“You’re going to have to spend some time learning how to operate the equipment and developing some flight skills,” Pajarillaga said. “You’re going to be your own mechanic.”

Organized racing will need to foster and develop a wider pool of talented pilots able to thread the needle between trees, through gates, and around each other on a fast-paced course. 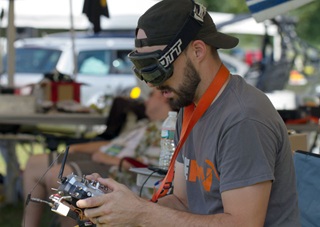 “When you talk about the best pilots, it’s the guys who are posting these awesome videos on YouTube,” Shevett said. One of those, an FPV specialist who goes by Charpu, has posted sponsored videos including this one, displaying an impressive blend of precision and artistry. “You don’t see that on the competition level.”

Pilots who stick to manned aircraft need not worry much about this crowd. With hundreds of hours and hundreds or thousands of dollars invested in their flying machines, the FPV race pilots were well-briefed and careful to avoid exceeding the 400-foot altitude limit (most stay very close to the ground), or allow their drones to stray out of sight. Drones operated carelessly or in ignorance of airspace regulations, or by those who just don’t care, have drawn the ire of the FAA, and conflict prevention remains a major concern of AOPA and other organizations.

“None of those people are here,” Shevett said, attributing the majority if not all of the reported violations and encounters with manned aircraft to consumer drones that arrive ready to fly by “credit card pilots” who then proceed to do “stupid stuff.”

“We’re the good guys,” Shevett said. “We’re doing this because it’s fun. That’s why we hold these events.” 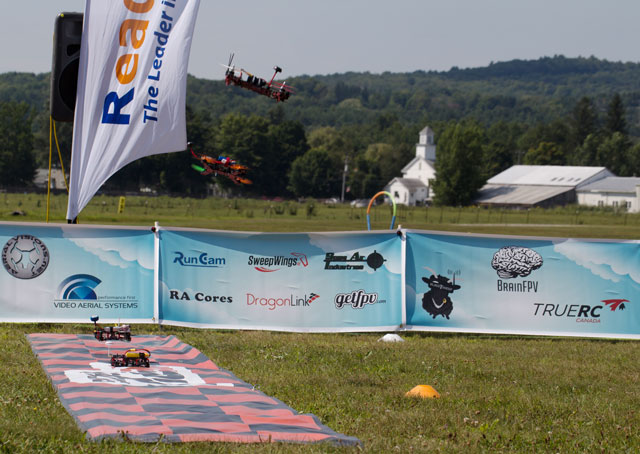