Get the app Get the app
Already a member? Please login below for an enhanced experience. Not a member? Join today
News & Media Powder River Complex to go live 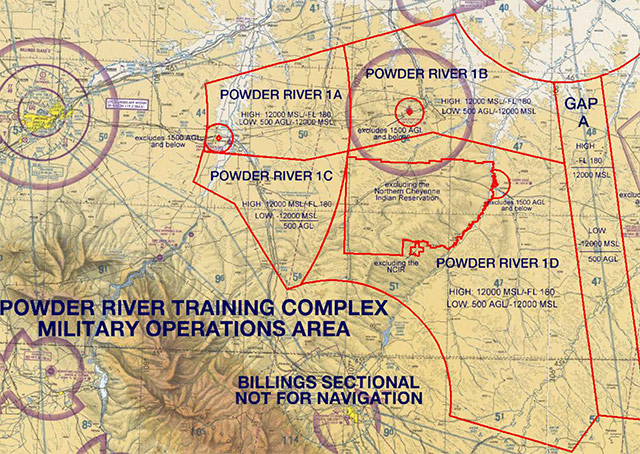 The Powder River Training Complex consists of four primary military operations areas connected by Gap MOAs, and will affect 39 airports and both VFR and IFR flights at altitudes from 500 feet agl up to the flight levels. The expanded Powder River Training Complex will be used for an estimated 2,882 training hours each year, compared to the 1,249 training hours conducted in the existing airspace annually. The military estimates it will use the airspace three-to-six hours per day, about 240 days per year.

Several of AOPA’s recommendations were taken into account in the final design, including requests to modify the MOAs to better accommodate IFR procedures, subdividing some MOAs to limit the affected area, raising the floor of some MOAs to allow aircraft to fly underneath, and adjusting some MOA boundaries to accommodate commonly used VFR routes.

These modifications will help to limit the impact of the MOAs on general aviation users. AOPA is working with the FAA and Air Force to implement a Special-Use Airspace Information System that would provide real-time information regarding military flight operations to general aviation pilots 24 hours a day via telephone or radio. A similar system has been in use in Alaska since 1990. AOPA is also working with the Air Force to ensure charted times of use more accurately reflect actual usage of the airspace and to ensure that arrivals and departures from Montana’s Baker Municipal Airport aren't negatively impacted.

“We appreciate that the FAA and the Air Force have accepted some of our recommendations, but this is an enormous chunk of airspace and we want to be sure that the impact on all general aviation users is minimized,” said Rune Duke, AOPA director of airspace and air traffic. “We’ll keep working with everyone concerned to ensure that general aviation operators have the best possible information and access to the airspace.”