Get the app Get the app
AOPA will be closed July 4th, in observance of the Independence Day holiday. We will reopen at 8:30 am ET on Tuesday, July 5.
News & Media Oregon's McNary Field airspace changes cause confusion 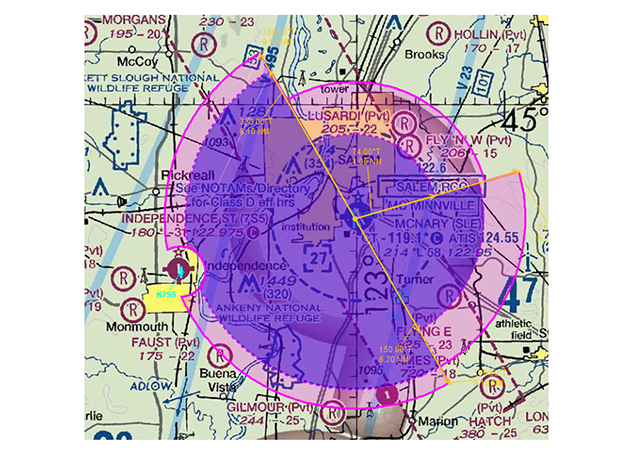 Pilots flying near Salem, Oregon, should be vigilant about recent expansions to the Class D airspace surrounding McNary Field Airport because the changes almost double the size of the Class D surface area with implications on nearby Independence State Airport as well. The FAA allotted the neighboring airport a tiny cutout for landing and takeoff operations, which local pilots say is too small to be effective.

“This large change, combined with the lack of visibility of the modification process, has resulted in many local pilots calling the Salem control tower and the FAA service center responsible for the airspace change,” said Rune Duke, AOPA director of government affairs, airspace and air traffic.

“It is unfortunate that local pilots were not better included in this unusually large expansion of Class D airspace,” Duke said. “After talking to the FAA’s Steve Haga, a western service center technical systems specialist, and Robert Broyhill, the air traffic manager of the Salem Control Tower, it was apparent the FAA was caught off-guard by pilots’ reactions. They agreed that a larger cutout was needed for Independence State Airport and said they were committed to looking at pilot comments.”

The changes took effect Aug. 20 and expand the Salem Class D footprint to about 16 nautical miles across, with a 1.2-nm arc nipped out of the west side for pilots flying into or out of Independence State.

The Seattle sectional chart will not depict the change until its Dec. 10 update, so the FAA has issued an aeronautical chart bulletin to reflect the 1.2-nm cutout for Independence State, and the 4.1-nm expansions to the northwest and southwest of McNary field.

The FAA said a review of the airspace revealed an increase and reconfiguration was needed to protect IFR operations for McNary Field’s Runway 13/31, with rising terrain factoring into the unusually large airspace changes.

Duke spoke with the air traffic manager at the Salem tower about the new boundaries and getting the word out to pilots flying in the scenic Willamette Valley corridor. He said controllers agreed to broadcast the recent airspace changes during hourly ATIS reports, and the FAA would issue a notice to airmen about the increase in size for Salem’s Class D airspace, which AOPA had requested during conversations with the agency.

An Aug. 27 statement from the FAA western service center addressed the agency’s plans for moving forward: “With the approval of management, we are going to revisit the airspace design. Although the majority of the airspace will not change, due to criteria in FAA JO 7400.2, we will consider operational needs of the Independence State (7S5) Airport.” Any changes the FAA makes will not take effect until Feb. 4, 2016, at the earliest. These changes would be reflected on the May 26, 2016, Seattle Sectional Chart.

“From my conversations with the FAA, they are taking proactive steps to make pilots aware of the recent airspace expansion and to help mitigate the negative impact on local pilots,” Duke said.