Get the app Get the app
Already a member? Please login below for an enhanced experience. Not a member? Join today
News & Media Solar Impulse fully funded

Journey to resume in April 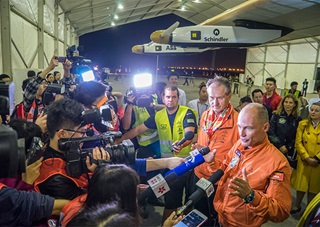 The Swiss pilots whose solar-powered circumnavigation was interrupted in July after Solar Impulse 2 took quite a beating crossing the Pacific Ocean have since been using more traditional aircraft to spread their message. Their record-setting aircraft grounded for repairs, co-founders André Borschberg and Bertrand Piccard headed to Paris for the United Nations Conference on Climate Change, or COP21, bearing news that an additional $20 million had been secured from project backers to complete repairs in Hawaii and resume the global trek.

Borschberg told Reuters Nov. 30 that the project’s total budget now comes to $170 million, including the latest pledges. The single-seat airplane includes many customized systems and advanced technologies. It is capable of flying day and night on electricity from more than 17,000 solar cells that is stored in batteries and carefully meted out during periods of darkness or heavy clouds. Pilots endure the cramped confines for days on end in the name of raising public awareness of climate change and renewable energy.

"The financial side is under control," Borschberg told Reuters. "We are all very focused and looking forward to continuing next year.”

The circumnavigation attempt began from Abu Dhabi in March, and the team hopes to depart Hawaii in April 2016, after repairs and test flights are completed. A 2,500-mile leg will bring Solar Impulse 2 to Phoenix, the first of three planned stops across the Continental U.S.

Battered by Pacific storms and afflicted with a problem tied to over-insulation of its 2,000 pounds of batteries that caused overheating and damage, Solar Impulse 2 has remained in Hawaii while its pilots take every opportunity to highlight potential uses of the technology developed by the project in everyday life.

“The goal is not only to use solar power more, the goal is to show that we can save energy by being more energy efficient," Piccard told CNBC in Paris.

Piccard said core technologies developed for the unique aircraft, including motors, lightweight structures, batteries, LED lights, and the power management system all have potential applications beyond powering a single-seat aircraft on a journey of nearly 22,000 miles.

The pilots also did not pass up photo opportunities with President Barack Obama and Chinese President Xi Jinping in Paris, and added those to a Facebook feed that is just one part of a social media machine created to spread the Solar Impulse message, even while the airplane is in the shop. The team also published a James Bond-themed blog to document their adventures at COP21, identifying the pilots as “Agents 001 and 002 of the #solarTeam,” apparently enjoying the irony of that treatment for a mission that is anything but secret.