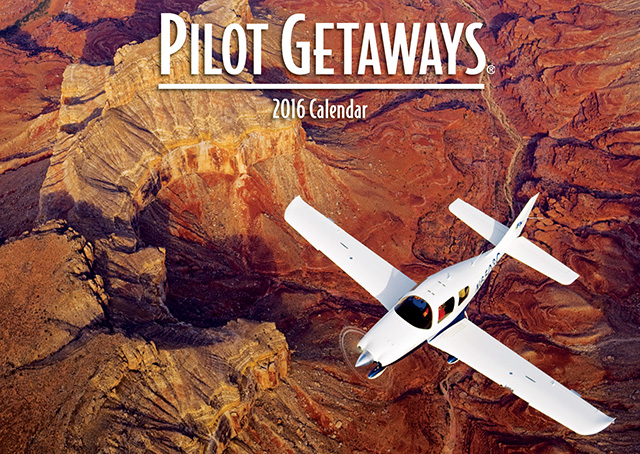 John Kounis, a former NASA engineer and the magazine’s co-founder, died suddenly in July 2015. He was known as much for his pilotage skills behind a Cessna 185 as he was for his humor and larger-than-life presence. Time after time, he skillfully coaxed the brothers’ blue-and-white taildragger into just the right position for his younger brother, George, to capture and frame breathtaking photos of destinations across the globe.

The calendar displays some of the Kounis brothers’ best photography and is a legacy to their combined efforts bringing far-flung destinations into sharp focus for adventurous pilots. AOPA Pilot published myriad travel stories showcasing their destinations, photography, and writing.

In an email to AOPA, George Kounis said, “Our goal is to put out a new calendar every year and donate 30% of the proceeds to the charities. One of the silver linings in John’s death was the creation of the John T. Kounis Memorial Scholarship fund by the Aircraft Owners and Pilots Association to encourage new pilots to earn their wings. Also, John fully supported the Recreational Aviation Foundation. We wanted to create something that would let us give 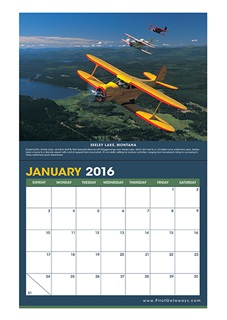 back every year to the aviation family John and I love so dearly.”

Thirty percent of the proceeds will be donated to either the AOPA scholarship fund or the Recreational Aviation Foundation, and George Kounis said purchasers can indicate to which organization they would like their funds to go.

The 13 images in the inaugural 22-by-13.5-inch 2016 calendar showcase some of John’s personal favorite getaways. Those who buy a calendar also can download the images in a digital format for desktop wallpaper at no additional cost. Single calendars are priced at $15.95 and are available on the Pilot Getaways website.

Contributions to the John T. Kounis Memorial Scholarship can be made online or sent to the AOPA Foundation at 421 Aviation Way, Frederick, MD 21701. Please note the scholarship name on contributions.