Get the app Get the app
Already a member? Please login below for an enhanced experience. Not a member? Join today
News & Media Air racing excitement added to AOPA Foundation auction 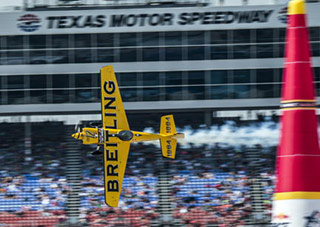 Imagine witnessing the incomparable thrill of air racing as a VIP spectator after taking part in a fabulous flight in a Breitling Extra 300 race plane with its celebrity pilot: That’s just part of a special package that has been added to the lineup of amazing items, experiences, and getaways in the AOPA Foundation’s online auction. The bidding continues until Dec. 20.

So place your bid to win a once-in-a-lifetime flight with Breitling aerobatic champion David Martin as a VIP guest with behind-the-scenes access to a Red Bull Air Race in Dallas-Fort Worth. Your access includes a pilot’s delight private tour of the Red Bull Air Race with the global Race Director, and an escorted tour of the hangars to check out the famous race planes up close.

The winning bidder will receive round-trip airfare from a U.S. city, and accommodations for two nights for two. There will be two VIP tickets awaiting you for a 2016 Red Bull Air Race, as well as two VIP passes to the Breitling chalet.

Souvenirs to preserve the memories of your thrilling excursion include autographed memorabilia and a personal photo.

And about that flight with a celebrated pilot in the Breitling Extra 300: Martin has been performing aerobatic displays since he was 19 years old. Martin has competed at the World Aerobatic Championships eight times, winning the four-minute freestyle flight competition five times. He also took top spot at the U.S. Championships in 2001.

Place the highest bid and you will get to experience all this—including some stick time during your ride with Martin in the Extra 300.

Donations to the AOPA Foundation, including those made through the online auction, make it possible for the Air Safety Institute to offer free safety and educational materials to all pilots. The tax-deductible funds also support AOPA’s Regional Fly-Ins, the You Can Fly program to increase the pilot population, the Reimagined 152 effort to get affordable aircraft into flying clubs, the AV8RS youth membership program, and airport promotion efforts.