Get the app Get the app
Already a member? Please login below for an enhanced experience. Not a member? Join today
News & Media Catch a drone for cash

Catch a drone for cash 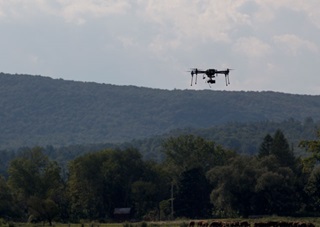 A small drone approaches a future public gathering, operator and intent unknown. It is well inside the boundary of an active flight restriction, and it is making a beeline for the crowd. If you can conceive of and build the system that is ready to swing into action at that future moment, and bring the drone down in one piece (more or less), you could win up to $100,000.

“With any payload still intact” are the operative words that make this a greater challenge than it might at first appear. Bullets (or other projectiles), lasers, and explosives will not get you past the initial screening and on the way to a fresh $100,000 in your pocket, alas.

Cashing in on all of that may require a combination of technologies and approaches, and MITRE Corp. has deliberately avoided describing any particular approach. The inbound drone (weighing up to 5 pounds) must be intercepted, controlled, and brought to a designated safe location. This requires taking control of the offending aircraft by some means.

“That can be a graceful take control or it can be a more aggressive, forceful” approach, said Michael Balazs, a MITRE technology integrator whose desk your ideas will cross on the way to the cash prizes. The MITRE Challenge requirements, detailed online, are specific enough to preclude many anti-drone measures already developed. Shotguns, a popular choice of privacy-conscious residents of rural areas, are off the list of possible options. It is “all about bringing it down safely, and in a controlled manner,” Balazs noted.

Jonathan Rotner, lead sensor systems engineer at MITRE and the owner of another desk between you and the prizes, said, “We don’t want to dictate the solutions.”

The Battelle DroneDefender, for example, which earned some recent media attention, along with similar devices that jam GPS or radio control signals (or both) may be part of the solution they seek. "We’re not looking to dictate that the system take control of it and” land the offending unmanned aircraft, Rotner said, which opens things up a bit. Bring the offending drone down intact? Yes. Land it gently? Not necessarily.

An explanatory note for those unfamiliar with MITRE: It is a nonprofit corporation dedicated to operating government-sponsored research and development centers. MITRE supports a range of science and engineering efforts, and has no commercial interest in intellectual property or profit. In other words, you can share your drone interdiction ideas with them without fear they will run to the nearest patent office and claim them as their own. White papers and signed participant agreements are due Feb. 7, 2016, and the specifications and submission addresses are posted online. 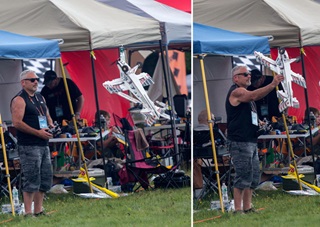 “One of the other roles that MITRE plays very well is that we try to bring government and industry together,” Rotner said.

Many levels of government are interested. The U.S. Secret Service would surely love a way to prevent further incursions on the White House grounds, to name just one federal agency with a mission to protect. Lawmakers in many states are considering legislation to impose jail time and stiffer fines for drone misconduct; California lawmakers, responding to reports of unmanned aircraft interfering with efforts to fight wildfires, considered legislation in the summer to legalize electronic jamming technology though federal laws and regulations, particularly FCC regulations, make that problematic. The FCC is not fond of jamming airwaves, and not all unmanned aircraft will respond the same way to jamming, anyway. Some might land immediately; others might fly back to where they started, depending on factory programming and even user-selected preferences.

Overriding the remote control instructions to electronically take full control of a drone poses other challenges, too. Flight control systems, communication protocols, frequencies, and other factors vary among manufacturers, to say nothing of custom-built rigs assembled by the user from parts purchased online or at a hobby shop.

And before control can be attempted, there’s the problem of detecting an object that can be the size of a dinner plate or smaller, moving at potentially high speed, arriving from any direction.

Other requirements of the MITRE Challenge: The system (or approach, to be more general) must be affordable, legal to use, technologically scalable (positioned to keep up as drone evil-doers get wise to it), and be “innovative, offering unique ideas and/or additional value, such as the ability to identify the operator of a threatening aircraft,” MITRE notes online.

It is possible that all the best minds who set to work on this will not come up with a workable solution, Rotner noted. And that is not necessarily a loss from MITRE’s point of view.

Rotner said knowledge gained from even a failed attempt “could inform future policy making. We don’t need a perfect solution. We want to be able to accurately represent the current landscape.”

Balazs noted that future drone control systems operated over cellular or other networks could make the technical challenge far greater. “That’s why we’re trying to get ahead of the game now.”

White papers received by Feb. 7 will be scored on how well they meet the basic requirements, and MITRE will then ask selected submitters to produce a video, with a deadline probably falling in April, that demonstrates the idea “beyond paper.” That will be followed in the fall by a live test of the system, with MITRE staff flying the “bad drones” and selected individuals or teams doing their best to detect and interdict.

The clock is ticking. The days of outlaw drones may be numbered.