Get the app Get the app
Already a member? Please login below for an enhanced experience. Not a member? Join today
News & Media Breitling Jet Team sets 2016 appearances 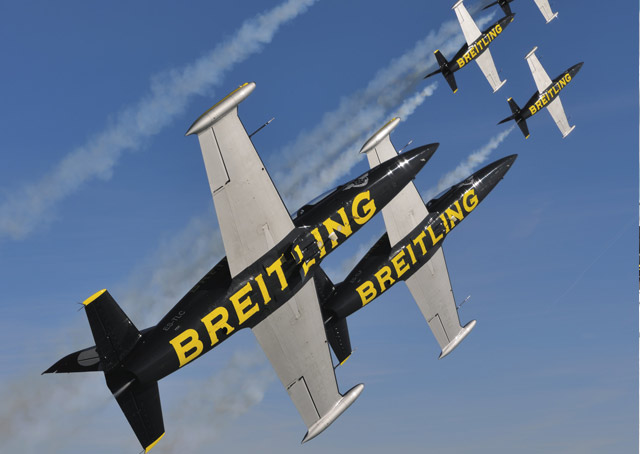 Breitling said its aerobatic display team will repeat much of its 2015 debut coast-to-coast tour across the United States and Canada, with approximately 15 appearances to include return performances at events including the Sun 'n Fun International Fly-In and Expo in Lakeland, Florida.

The team also will add new appearances to its schedule, including the Fort Lauderdale Air Show May 7 and 8 in Fort Lauderdale, Florida, and a two-day visit to San Francisco Oct. 8 and 9 during Fleet Week. Breitling announced the schedule during the International Council of Air Shows convention in Las Vegas, Nevada. View the full schedule.

The prestigious aerobatic display team, established 13 years ago, is the first and largest of its kind, with seven pilots flying L-39C Albatros jets in a sophisticated demonstration of precision and speed, at times reaching 565 mph while the jets fly within just a few feet of each other, Breitling said.

“With the success we enjoyed this year, it was an easy decision to bring the Breitling Jet Team back to North America next year,” said Breitling USA President Thierry Prissert. “It was thrilling having them here for their first-ever North American Tour, and the response from American and Canadian audiences has been overwhelming. Their precision, timing and athleticism embodies the spirit of Breitling.”

“It was incredible to tour the United States and Canada for the first time this year and we are so happy to be returning in 2016,” said Jacques Bothelin, leader of the Breitling Jet Team.