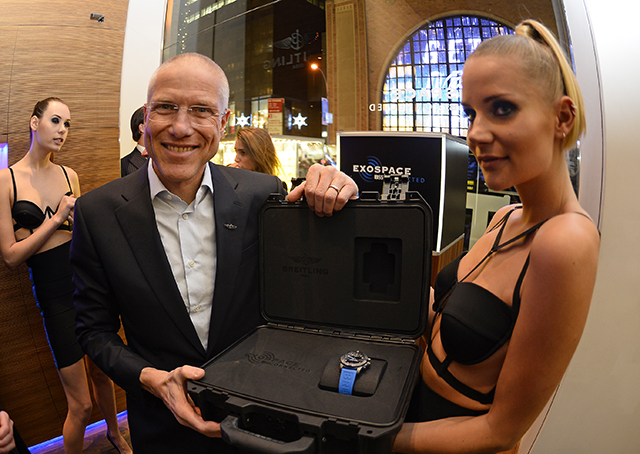 Tucked between Saint Laurent of Paris and Chanel in New York City, the Breitling Boutique was a beehive of activity Dec. 16 as the Swiss watchmaker unveiled the latest of its sought-after aviator watches, the Exospace B55 timepiece, which logs flight time almost by itself.

The chronograph is the brainchild of turbine helicopter pilot and company vice president Jean-Paul Girardin, who noticed a need for a wristwatch to count the time from initial blade spin to rotor shutdown, as well as takeoff and landing operations. 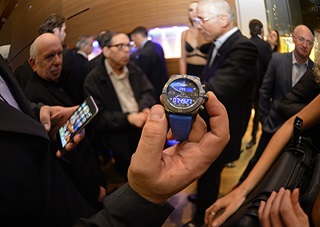 Girardin said it was a bit painful to remember to log all of that time, so the engineer researched and developed a smart watch that does most of the log-keeping for pilots and is also capable of sending logbook time entry via email that ultimately minimizes pilot distractions and helps keep an uncluttered, nearly paper-free cockpit.

“I’m not a fixed-wing pilot, I’m a helicopter pilot. So flying helicopters, what we have is called ‘block time’ and ‘flight time,’” he explained. “As a pilot you can log the time as soon as the rotor is turning and that is called block time. When you land and when the rotor is stopped you have your block time. It’s always a little bit painful to remember ‘block off, takeoff, landing, block-on time,’ so we make our life much easier when you just go to the chrono flight function and press on the 2 o’clock [button] for block off, takeoff, landing, and block on.”

Astronaut Mark Kelly said he was a Breitling fan for years before the watchmaker signed him on as an ambassador for its aviation watches in 2012. “I’ve been talking to Jean-Paul and others about what features pilots and astronauts need a lot. This watch being announced today does some things for aviators that other watches do not do. They have a long history with pilots. Actually Breitling started by building clocks for airplanes, on the instrument panel, and moved on to building watches for the Royal Air Force,” Kelly said. “You know I flew a Breitling watch on three space flights. For me it’s not only a watch for a pilot, it’s a watch for an astronaut.”

“Flying doesn’t sustain mediocrity because consequences can be very important. In professional business you have to do things properly, and that is something which is very important,” Girardin said. “That’s why this watch is a real Breitling watch but it’s also a real Swiss-made watch. We developed it with technology, capacity, and innovation and we are really looking forward to the response.”

Girardin said the idea began about 18 months ago after the company brought its B50, Breitling’s first in-house quartz multifunction analog movement timepiece, to fruition.

“What was very important for us, as you know when you are flying, is legibility. To have this kind of highly contrasting display, we needed rechargeable batteries.” One thing led to another as the new B55 was born.

“We had a cable to recharge the watches every one or two months. Having that USB plug into the computer, we thought, ‘OK, this is a kind of connectivity and we have a link, a cable, so maybe we could also exchange data using the cable.’ We started to think about what we could do with having an exchange between a computer and a smartphone and a watch.”

Breitling has brought engineering and elegance to its aviation timepieces for decades, and the company’s earlier innovations proudly dot the second floor of the watchmaker’s retail boutique. “For us it was very obvious we couldn’t have a phone on our wrist because it was such a big interface.”

Playing to the strengths of myriad devices in modern aviators’ toolbelts was the goal, Girardin said. The Swiss company had already proved it could make a user-friendly timepiece but the hurdle was to integrate the watch into the smartphone and not the other way around.

The solution was elegant but unheard of—to have the watch control the smartphone because it was already in a handy position on the pilot’s wrist instead of floating loose in the cockpit.

“If you have a digital logbook you can download that immediately in your logbook. Using the app makes your life much easier,” he said.

In addition to the log-keeping, the watch functions as a chronograph for various measurements including flight times, recorded times with split times, and lap times, the company announced at the ceremony, which featured light hors d'oeuvres and heavy drinks.

“In my business we’ve seen a lot of connected watches this year and so-called ‘smart watches,’” said Mark P. Bernardo, WatchTime Digital Media Editor. “Coming into this today I was curious about what makes this one different. What makes it different is how perfectly suited it is for aviation, especially. The compilations this watch has—flight times, arrival times, block times—is something I just learned about today. The whole thing about timing, which I’m sure you pilots are familiar with, seems to be an imminently useful feature whether you’re flying a plane, or as Jean-Paul pointed out, timing a jog or timing something in a car. The fact that the watch does what the watch is good at doing—and the smartphone does what the smartphone is good at doing—complements each other.”

Girardin did not rule out the future possibility of connecting with popular navigation apps like ForeFlight, FlyQ, and AirNav Pro, which he uses.

“We are thinking of what kind of new features to have, and which ones will we keep. There are so many possible new functions you could add. We are trying to think about maybe adding sensors for an altimeter, a GPS receiver, a gyroscope, or an accelerometer. Everything is possible now.”

Girardin said the list price for the rechargeable battery-powered multifunction Breitling Exospace B55 is $8,900, and it is now available. 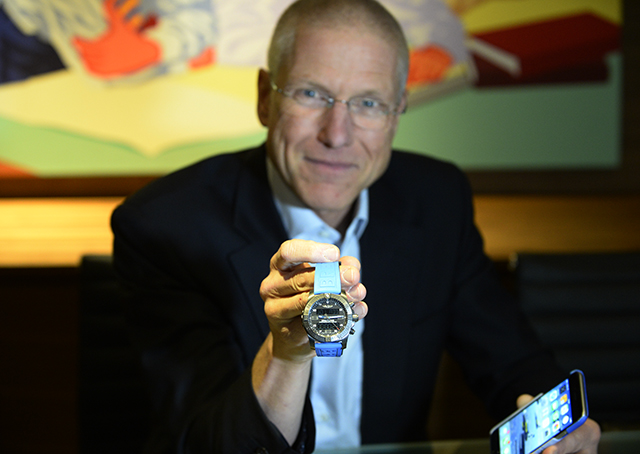