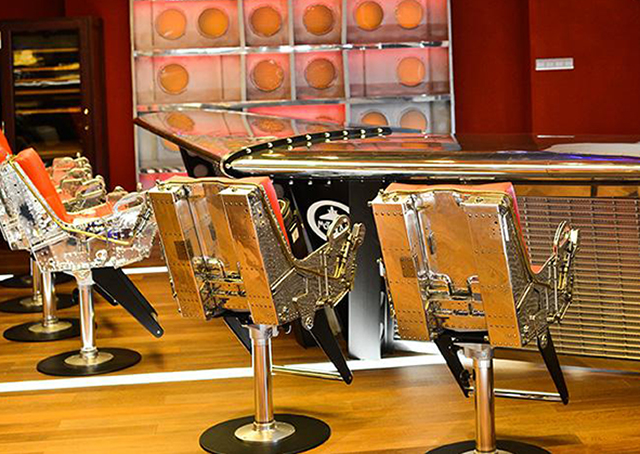 Several custom furniture businesses have launched in a bid to take recycling to a higher level. Sky high, in fact.

The latest salvaging craze is making usable desktops, loveseats, picture frames, and rolling bars from vintage aircraft and retired jets. The idea is appealing in the world’s quest to become “green.”

And there’s one other thing. Creating something new out of something old honors the valiant aircraft for its service to the public, and it helps keep the memories alive.

MotoArt is one of the companies at the forefront of recycling retired airplane parts into works of art. The company has been in business for more than a decade, and several aviation furniture firms have since taken off to transform aviation junk into modern Picassos. 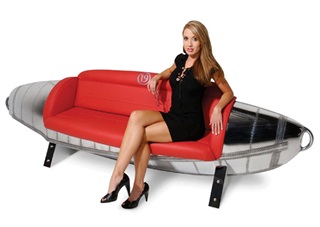 Cox explained why the price of aircraft furniture is sometimes stratospheric. “You may get days into a piece and find it unsuitable due to a patch. These are heavy, sharp pieces, and if you don’t prep them properly, people can get hurt,” said Cox. “Since they’re aircraft parts, they’ve gone through expansion, contraction, and they’ve been tweaked from every manageable direction. Trying to make an elevator into a level surface for a desk is not a slam dunk. You don’t know if it’s straight and the legs have to accommodate that. It’s ridiculous the amount of time it takes, but it’s beautiful when we’re done.”

Another reason the avant-garde furniture is pricey, Cox said, is because the originating aircraft are part of an extremely limited supply chain. Because the U.S. government changed its procedures for retired aircraft sales after the 9/11 terror attacks, parts formerly sliced from fighters and historical U.S. military aircraft are no longer available, she said.

“Boneyards have closed since 9/11 so you can’t access any more product. Even military guys call us and we can’t get them anymore and neither can they. Our inventory is very, very rare and becoming more rare so we’re priced accordingly. We sell rare antiques.”

Cox’s desk is literally a B-25 rudder. She feels a strong connection to the piece of aviation art because her brother was a U.S. Air Force pilot and Cox said she wonders, “Could this have been one of the aircraft he flew?” 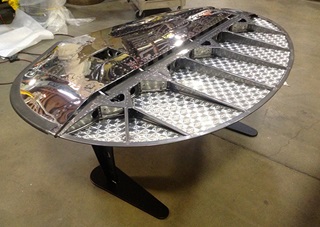 Cox said MotoArt’s pieces are good deals for the amount of time and care that goes into each product, and she pointed to a nifty Beechcraft C-45 Expeditor rudder for $6,900 as an example. “For instance, you have to take the lead [placed into control surfaces for balancing] out of it so when you go to powder coat the piece it won’t melt. Even polishing something with the wrong grit will destroy a piece.”

When transformed into functional, historical pieces of art, and placed into the custody of new owners, she said, each piece should be cherished for its rich heritage and the service it provided. “Each new owner becomes a protector and curator with the opportunity to share exciting stories of our great country’s past. I’ll sometimes interview the clients to make sure these parts go to good homes where people will honor it, respect it, and talk about it.

“The perfect example is Bob Parsons, who owns GoDaddy. He was a U.S. Marine and jumped out of C-119s. We had the entire side of a C-119 and it even had the words ‘United States Marines’ on it. A piece of C-119 fuselage with the word ‘Marines’ painted on it became his personal desk.”

Cox pointed out a classic wood-and-aluminum Boeing Stearman biplane wing that was transformed into a desk after decades of faithful air service. The honey-and-red “Stearman Shorty” design wing is reduced in size from its original length to fit residential applications, and pricing starts at $8,900. Cox encouraged interested aviators to contact her via email for preferred pricing. 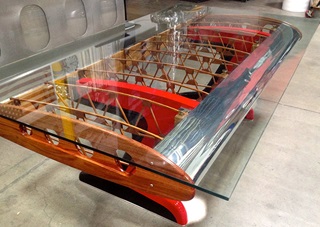 Intrepid Design of England’s aviation furniture also has been taking repurposing to a new level, and the company's work is known worldwide. “In a nutshell, we create beautiful pieces of furniture from aircraft parts,” owner Andrew Jackman told BBC Radio. Jackman said the transformation of military aircraft ejection seats into workable art is a bit of a man-cave thing. “The engineering that goes into them is just incredible. They take hundreds of hours to get to that situation.”

Finding the right pieces to turn into finished and functional aviation furniture “is very difficult actually. A lot of it comes from word of mouth, from contacts, from knowing the right people,” Jackman said on the radio program. He began his high-end aviation art quest with a 1940’s radial aircraft engine that he wanted to make into a functional table.

The company has progressed from radial engines to fanjet designs from retired commercial airliners and pieces of British warbirds. Intrepid offers an LP2 spinning Harrier Jump Jet coffee table for $13,398.

In Seattle, the Boeing Store’s Custom Hangar line has a variety of gracefully curved leather chairs and loveseats that are repurposed parts from DC-9 Pratt & Whitney JT8D engine cowlings, marketing manager Madia Logan wrote via email. A 30-inch-high-by-57-inch-diameter polished aluminum cowling with its black leather seat stitched to resemble a fan blade was a showstopper at 2015 EAA AirVenture.

“The hours of polishing and the custom upholstery left fans speechless at the beauty and detailing,” the company’s buyer and product developer Gerardo Mores wrote on the product’s webpage. The jet-engine-turned-into-loveseat comes with a certificate of authenticity for $7,650.

Boeing sells reversible tables crafted from the JT9D engines, a DC-8 CFM56-2 engine stator table, a 727-200 table made from a leading edge wing slat, and more. If you have to ask about pricing, well, it’s best to just move along. 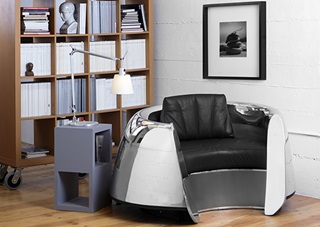 However, their Take-off Meeting Table approaches Class A airspace with prices beginning at $16,000; chairs are extra. That’s more than the average asking price of a flying Ercoupe, and depending on options, SkyArt’s prices go up from there.

“Made to order, therefore it is totally customizable,” wrote Irmak Erol, SkyArt’s marketing director, via email. “A meeting table made with two pieces of wing flaps, for eight to 10 people, is sold typically for $16,000 to $18,000. The Volant Office Chairs are sold separately [for] $850-$1,200 each depending on upholstery options.”

It should be noted that SkyArt’s Airbus 300-series airline seats, formerly available in triples, doubles, business class, and singles, are sold out.

If you can’t wait to commission a unique design or if your pocketbook leans more toward a Piper Colt than it does toward a Gulfstream G500, PlaneTags.com can supply you with a piece of aircraft skin from a formerly flying aircraft stamped into a handy keychain or luggage tag. PlaneTags.com is a new division of MotoArt that allows a lower entry price into aviation art collection. 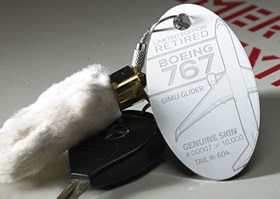 Pilots can grab a piece of a retired Grumman Albatross or a Douglas DC-6 for less than $40, and each piece comes with a certificate of authenticity. “It’s a brand-new product and these things are selling like hotcakes,” Cox said.

“The 747’s are beautiful and the B-25’s are amazing, there are so many cool ones. It’s fun for us because it gives everyone an opportunity to have some MotoArt,” she said.

Since the tags are made from real fuselages, Cox reminds customers that imperfections aren’t product flaws but, rather, the beauty of the one-off product. The tags are laser-printed, not painted.

For do-it-yourself dumpster divers and eBay connoisseurs, a quick search of “aviation furniture” at the online auction site turned up several club chairs and desks in the $800 to $3,000 range that are made from reclaimed, riveted aluminum aviation skin.

Better yet, pilots taking a look in their own hangars might reveal potential for aviation art on a more personal level. Charred pistons, cracked props, or warped rudders might just be the aviation beauties in the eyes of another beholder—the ultimate path of recycling for aviation buffs. 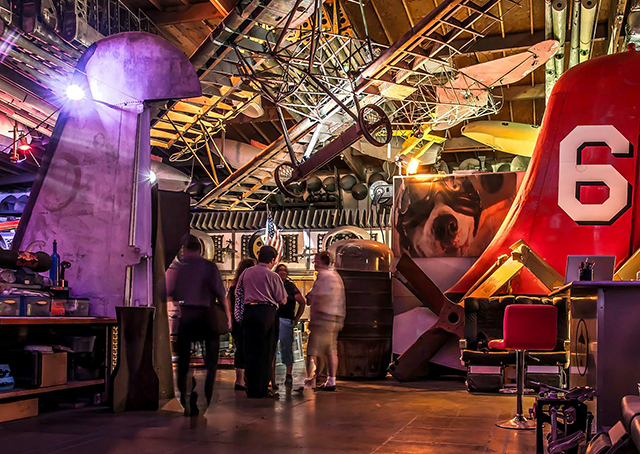