Less than three seconds after the violent roll began, both the landing and the airplane were beyond salvation.

A student pilot flying his second solo in a Cirrus SR20 had a painful lesson in the power of helicopter rotor wash on Dec. 5, when his attempt to land about 30 seconds behind a departing UH-60 Black Hawk helicopter ended in a cartwheel and a cloud of dust.

The pilot initiated a go around and fought in vain to save the aircraft, which came to rest seven seconds after the first visible sign of trouble captured by a surveillance camera at Fort Collins-Loveland Municipal Airport in Colorado. The video was posted Jan. 28 on YouTube, and had been watched more than 109,000 times by Feb. 4. Pilots, including flight instructors and the AOPA Air Safety Institute, seized on an opportunity to learn a valuable lesson: While encounters with rotor wash and its fixed-wing cousin, wake turbulence, are thankfully rare, they can end very badly indeed. On one particularly unlucky day in March 2014, three different aircraft in different locations encountered the rotor wash of a military helicopter with disastrous, though non-fatal results.

In the Dec. 5 incident, the pilot escaped with minor injuries, and has since flown again with his instructor, Patrick Hinton, who owns Leading Edge Flight Training at the airport where the Dec. 5 accident took place. Hinton said in a Feb. 4 telephone interview that it would have been difficult if not impossible for any pilot to save the Cirrus once it was caught up in the Black Hawk’s wake, a mass of swirling and turbulent air created by the heavy helicopter’s rotors producing lift, and lift's equal and opposite reaction, rotor wash.

“He made a decision to go around at the first indication of wake turbulence and unfortunately that was just prior to hitting the bulk of it,” Hinton said. The student pilot suffered broken bones in his right hand and foot, which suggests to Hinton that he “had the right rudder probably pushed down pretty firmly and had his hand forward on the throttle. Other than applying control deflections against the yaw and roll, I don’t see what more he could have done there.”

The video begins with the Black Hawk lifting off over the 8,500-foot Runway 33 on a relatively calm day. The wind was blowing from 110 degrees at 3 knots at the time, according to the NTSB preliminary report on the accident, though the time of the accident listed in the preliminary report (which is always subject to change after the facts are investigated) appears to be at least seven minutes apart from the camera clock displayed in the video (which is also about an hour ahead of approxiamte local time). The nontowered airport is at 5,016 feet elevation, and the skies were clear as the Cirrus SR20 made its final approach.

The student told investigators he had spotted the Black Hawk while the military helicopter was on downwind and delayed his own turn to base until the helicopter was on its final approach for a touch and go. The student told investigators he was concerned about the helicopter’s wake turbulence (the phrase used in the NTSB report), and aimed to land beyond the helicopter’s touchdown point. This is consistent with the guidance on avoiding turbulence caused by fixed-wing aircraft  in the Aeronautical Information Manual, as far as following a landing aircraft goes. However, a helicopter’s rotor wash behaves differently than the wingtip vortices of a fixed-wing aircraft, extending outward in all directions. 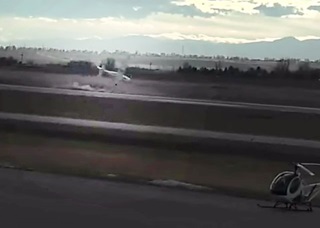 The time-stamped video shows the Cirrus beginning to roll to the left and the nose pitching slightly up at the 15:28.18 mark, and the left wing may have touched the ground as little as two seconds later. There appears to be more definite evidence of a wing strike, including a possible spark, about four seconds after the roll begins. The aircraft came to rest four seconds after that, the propeller and tail sheared off, and the wings badly damaged. The cabin was largely intact, however. Hinton, who was at the airport but did not see the incident as it happened, said the Cirrus’ door opened easily, and he believes another aircraft might have sustained much more significant damage, and his student’s injuries could have been much worse as well.

Hinton said there are many helicopter operations at Fort Collins-Loveland, and he saw a Cessna 172 almost come to grief in nearly identical circumstances a week after the Cirrus accident. The Skyhawk was approaching soon after the departure of a UH-72 Lakota, a military version of the Eurocopter EC145 that weighs up to 8,000 pounds, which is less than the Black Hawk’s cargo capacity and about a third of the UH-60's maximum gross weight (listed in one online source at 22,000 pounds, 24,500 pounds for ferry operations).

Hinton said the Lakota’s wake appeared to catch the Skyhawk and roll it in a nearly identical fashion, though the Cessna pilot was able to recover. Hinton noted that the vortices produced by aircraft correspond to lift being generated, and he has told students to allow at least a full minute for the wake to dissipate after a helicopter operation over or near a runway.

“The big takeaway here is that a Black Hawk weighs 20,000 pounds,” said Hinton, adding that any helicopter must generate a surplus of lift to climb, increasing the magnitude of the vortices produced.

While rare, such accidents are not unheard of. The NTSB found loss of control caused by helicopter wake turbulence was the cause of a 2003 accident involving a Grumman AA-5B that landed safely despite substantial damage at a Texas airport. 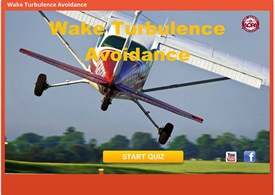 Wake turbulence encounters are rare but potentially dangerous, particularly when the wake in question is made by a heavy aircraft flying slow. Rotor wash from helicopters is similar, though it behaves differently. Both result directly from creation of lift, and even a light aircraft can produce a dangerous amount of it under certain circumstances.

“Wake turbulence from aircraft and rotor wash from helicopters should be a concern for pilots, especially those who fly light aircraft,” said AOPA Air Safety Institute Senior Vice President George Perry. “A pilot’s best defense is knowledge of how wake turbulence propagates and the time required for it to dissipate. The Air Safety Institute has a quiz that will help pilots better understand the phenomenon and gives them tips on how to avoid becoming entangled in wake turbulence.”

The Air Safety Institute has just updated that quiz, and previously prepared a special report about a 2006 accident that highlights the power of even a relatively small “heavy” aircraft’s wake.