Get the app Get the app
AOPA Members DO more LEARN more SAVE more - Get MORE out of being a pilot - CLICK HERE
News & Media Quick Look: Citation Bravo

Like so many other designs in aviation, the Citation II was reborn into the Bravo because of improvements in engine design. 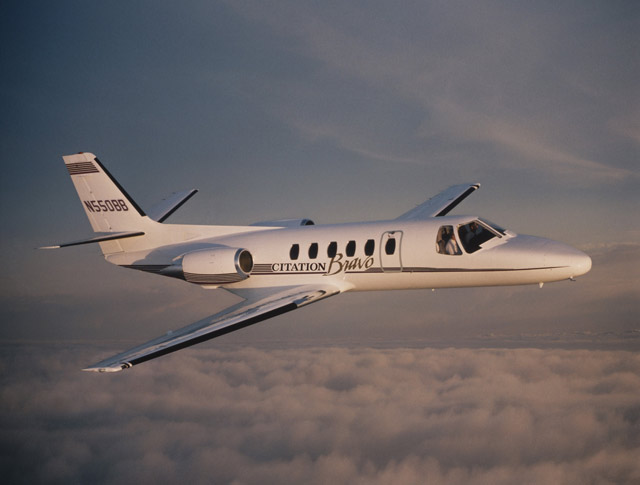 Cessna’s Citation II was a runaway success after it was introduced for the 1978 model year. Throughout its 16-year production run, civilians, corporations, governments, military, and other operators all over the world used C550s for myriad missions. The II had the right formula when it came to cabin size, short-field capability, performance, and economy.

But even the world’s most popular small jet reaches a life limit, of sorts. Like so many other designs in aviation, the Citation II was reborn into the Bravo because of improvements in engine design. Throw in some advanced glass avionics and fix items that annoyed pilots and passengers, and the next thing you know, you have a new Citation model.

The Bravo was introduced in 1996 and it enjoyed a 10-year run, keeping the popular and proven C550 airframe mated with new engines, avionics, and trailing-link main landing gear. In the lineup of the day, the Bravo filled the gap between the CitationJet and the Citation V.

On the power side, the Bravo employed higher-bypass Pratt & Whitney PW530A engines producing 2,887 pounds of thrust each— while using slightly less fuel than the II’s Pratt & Whitney JT15s. The new engines also power the Bravo up to a maximum operating altitude of 45,000 feet, and a superlative cruise speed of around 400 KTAS in the low 30s while consuming about 1,200 pounds per hour. At higher altitudes, expect about 370 KTAS with fuel burn in the 700-800 lb/hr range. Cruise speed for the Bravo is about 20 knots faster than the II on about 10 percent less fuel.

Cessna made big changes up front, with the introduction of the Honeywell Primus 1000 avionics system. Three screens present flight and navigation data supplied by the Honeywell GNS-XLS flight management system or raw data from Bendix-King VOR/ILS/DME and ADF receivers. Many Bravos were later optioned with the Universal UNS-1K FMS in place of the GNS-XLS. TCAS II and Doppler radar were other major avionics options.

The new trailing-link main landing gear smooths out the rough taxi that was a trademark of the low-slung early Citations. A larger airstair door, rather than the more delicate steps of previous Citation IIs, greeted passengers. Once inside they may notice slightly more headroom compared to the II, thanks to a redesigned headliner. Ski tubes also are available for installation. Overall, the interior of the Bravo is a big improvement over that of a II, with better materials and more attention to detail.

According to aircraft value reference Vref, Bravos range from $1.75 million for a 1997 model to $2.9M for a 2006 version. Like all straight-wing Citations, the Bravo is an easy-to-fly jet with simple, proven systems, as well as an excellent support network with service centers throughout the world. Adding new engines and avionics carried the tried-and-true Citation II into the new millennium with style, performance, and economy.