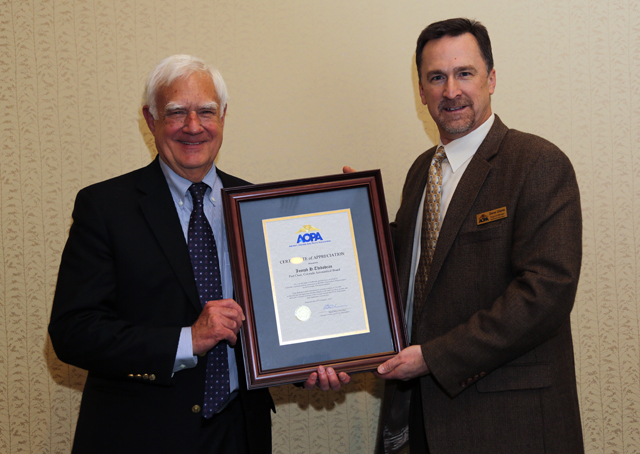 AOPA honored member Joe Thibodeau with an AOPA Presidential Recognition Jan. 27 for his commitment to general aviation in Colorado.

Thibodeau is active in the Colorado aviation community, flying his P-51 Mustang Crusader to events around the state and serving on the Colorado Aeronautical Board. AOPA Regional Manager David Ulane presented him with the award at the Colorado Airport Operators Association’s Spring Legislative Conference in Denver for his service on the board; Thibodeau served nearly six-and-a-half years as the pilot organization representative and was chairman of the board in 2013 and 2014.

The presentation acknowledged Thibodeau for advocating on behalf of Colorado’s general aviation community on the board, which is responsible for aviation development in Colorado.

“Your dedication and commitment to general aviation in Colorado in that role has had a significant positive impact on the state’s aviation system, and the 9,200 Colorado members of the Aircraft Owners and Pilots Association truly appreciate your service,” reads the recognition, given on behalf of AOPA President Mark Baker. More than 100 Colorado aviation professionals attended the conference at which it was given.