Get the app Get the app
Already a member? Please login below for an enhanced experience. Not a member? Join today
News & Media Pilots urged to review update on Twentynine Palms airspace plan 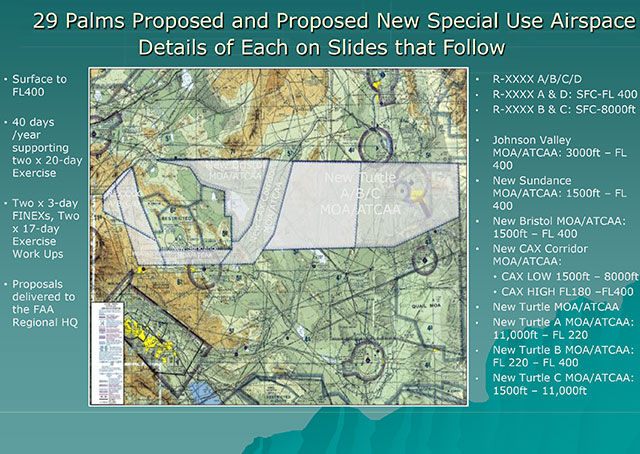 As the FAA works to complete an aeronautical and environmental review of the Marine Corps’ special-use airspace proposal at Twentynine Palms, California, AOPA is urging members to study the latest available information and address the plan’s impact on general aviation.

In 2014, the Department of the Navy and the U.S. Marine Corps submitted their proposal for the establishment and modification of special-use airspace to support training at the Marine Corps Air Ground Combat Center in Twentynine Palms. The proposal followed an environmental impact statement for which it solicited comments in 2011.

AOPA has been an active participant in the review process, and submitted formal comments on the environmental impact, requesting mitigation of a number of impacts the airspace design could have on general aviation pilots’ ability to conduct efficient flight operations.

Since the military submitted its proposal to the FAA, officials have continued to reach out to the GA community, and the public, as the approval process has moved along—including briefing pilots on the project at AOPA’s Regional Fly-in at Chino, California, last September, said Melissa McCaffrey, AOPA senior government analyst for air traffic services.

“AOPA is encouraged by the outreach efforts by the U.S. Marine Corps,” she said. “By reaching out to user groups and briefing local groups, they have made sure the general aviation community has the most updated information.”

She encouraged pilots to review a recent informational pamphlet the Marine Corps published to address frequently asked questions and provide an updated status report on the approval procedure for the special-use airspace plan.

“There are potential impacts of interest to general aviation pilots, so it is important that they stay informed, understand the process of airspace modification, what part pilots play in the review as airspace users, and how the proposed changes could affect their flight operations,” she said.

McCaffrey urged pilots to continue checking for updates on the plan, and to share any potential impact on their flight operations with AOPA.