Get the app Get the app
Already a member? Please login below for an enhanced experience. Not a member? Join today
News & Media Command performance

The online startup that put Web surfers in the pilot’s seat (and on the wings) during aerobatic performances has added a new feature giving viewers control of more than just the various cameras.

Impreciv Systems, the company behind iFlyTheAirShow.com, is now getting set to let viewers call the shots (or figures, in this case), interacting with the pilot in real time through a custom-built interface. In live performances that will likely begin in March, online participants will be given simple tools to build a sequence of aerobatic maneuvers, and then sit back and watch as their command performance is flown—toggling between camera views.

Launched by Chicago-area pilots in 2014 as a service for aviation enthusiasts and armchair aerobats, the website is being outfitted with new features that take interactivity a step beyond what’s out there—with potential to transform the viewing experience for any number of sports by giving viewers a measure of control over what happens.

“The word that I always keep coming back to when I describe this to people is ‘revolutionary,’” said company co-founder Glenn Olsen, a charter pilot for 25 years who teamed up with airline captain Rick Siegfried to develop the platform launched in 2014. “It is a significant evolutionary step in how people interact with media.”

The AeroShell Aerobatic Team partnered with iFlyTheAirShow.com in 2014, and has provided much of the recorded material already available on demand. Viewers purchase a single credit starting at $0.99 for up to 30 minutes of air time (pun intended), and can choose from various camera angles as the recorded flight proceeds. A live online broadcast can be accessed for prices starting at $1.98 for two credits.

Olsen and Siegfried spent much of 2014 proving the concept, arranging in-aircraft viewing experiences at airshows starting with EAA AirVenture, and later the National Championship Air Races in Reno, Nevada (where Siegfried flew his T-6). 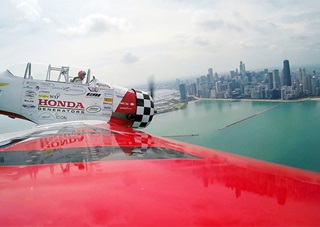 “Getting through the end of 2014 was really all about launching the basic concept,” Olsen said. The new interactive element takes the multi-camera approach a step further, to give viewers “some feeling that they were actually flying the airplane from the couch in their living room.”

Siegfried and Olsen, friends who both live in a residential air park, said talks are underway with several airshow performers interested in showing their stuff for an online audience that could extend worldwide, and there also has been interest in the system for use in aviation training, and inspiring interest in flying careers. Museums are another natural fit, Siegfried noted:

"They have interesting airplanes, and they have an interest to reach out to the world and show people what they’re doing.”

An interesting airplane doing interesting things is a key ingredient that helps fulfill a core mission.

“We’re not just building a system for aviators,” Olsen said. “Really what we’re targeting is, people who are interested but not necessarily involved in aviation.”

The system is built from various components designed for other applications that have been customized and arranged into a proprietary setup that includes an array of aircraft-mounted cameras fed into a radio relay that can (currently) transmit six high-definition video channels from a single airplane, and will eventually be scalable to 16 channels. Among the technical challenges they’ve overcome is devising an antenna setup that can handle that kind of bandwidth while maintaining radio contact with the ground station as the airplane (or airplanes) maneuver. Sometimes abruptly.

While pilots will soon be flying sequences designed by the audience, there are safeguards against a crowd demanding a sequence that is unsafe, or simply un-flyable. The ground operator helps vet the sequence before it is sent to the pilot, who, of course, remains in command. As the service ramps up, Siegfried and Olsen expect to recruit more pilots in the United States and, potentially, abroad, and that may include individuals with their own aerobatic aircraft—pilots interested in participating are welcome to contact the company for more information. Airshow pilots with established websites may opt to license the technology and present videos on their own websites fed by the company’s servers.

Siegfried said the end result has proved effective at creating an interactive experience.

“It’s funny to watch people when they’re viewing these different experiences,” Siegfried said. “When people start switching the views and they’re sitting at their computer, all of a sudden their heads start to move.” 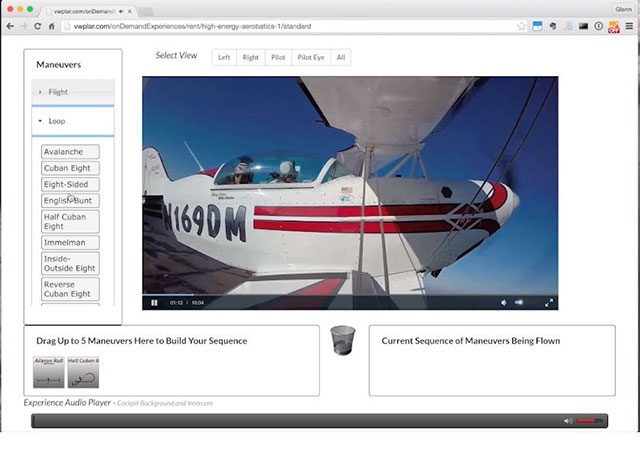