Get the app Get the app
Already a member? Please login below for an enhanced experience. Not a member? Join today
News & Media Grumman Widgeon dubbed favorite 'Pilot' cover 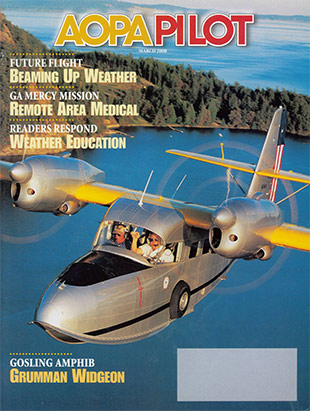 After nearly a year of voting for their favorite AOPA Pilot magazine covers, members have dubbed the March 2000 cover featuring the Grumman Widgeon the winner. Members voted weekly to select their favorite covers by year and then decade until the field narrowed to five contestants.

AOPA Photographer Mike Fizer snapped the cover image for Barry Schiff’s Grumman G-44 Widgeon feature. “Grumman Aircraft Engineering Corporation was known during its heyday as the Grumman Iron Works. There was nothing fragile about a Grumman-built airplane,” Schiff writes. Get all the details on the Widgeon in “Grumman’s gosling.”