In the last segment, we discussed how critical it is to do a careful inspection of your aircraft’s exhaust system as part of every preflight. In addition, an in-depth exhaust system inspection should be done as part of the aircraft’s annual inspection. Unless the system is particularly difficult to remove, it’s a good practice to completely remove the system from the aircraft for inspection. Be sure to pre-soak the exhaust stud nuts in penetrating oil if they do not come apart easily. This is especially true on Continental engines. Never use excessive force on a stuck exhaust stud nut!

Removing the system has a number of benefits.

That last point about slip joints is particularly important. Slip joints in an exhaust system are there to relieve stress in areas where movement is expected in regular operation. If the joints are frozen in place, the entire system is under stress with vibration and movement that will eventually cause a failure at the weakest point of the system. I recently removed an exhaust system on a Bonanza only to discover that some past mechanic had drilled the EGT probe holes right through the slip joints on each cylinder, virtually ensuring that the installed EGT probes would lock things up and prevent the joint from doing its job. Frankly, I’m surprised that the probes themselves didn’t fail due to this issue.

Any distortions or obvious thinning in the pipes warrants repair. Similarly, carefully inspect the mufflers with the heater shroud removed for any leaks, cracks, etc. Many mufflers also include flame cones which need to be very carefully inspected for warping, cracks, or missing pieces. Once these begin to fail, they fail quickly and have the potential to partially block the airflow of the muffler.

When it comes to exhaust components you have two options: repair or replace with new. Repairing exhaust components have been a bit of a joke within the maintenance community for years. This is because the FAA regulations permit anything to be considered a repair, so long as there is some representative piece of the original component remaining. In other words, when you send in your muffler for repair, you often get something back that is entirely new, save for a very small piece of metal somewhere on the muffler that came from the original component.

In order to produce a completely new exhaust part without calling it a repair would require a parts manufacturer approval (PMA), which can be prohibitively expensive for most shops to obtain. So, we live in a world where many shops “repair” 99 percent of what you send them with new metal—a classic case of absurdities in the world of aviation regulation. 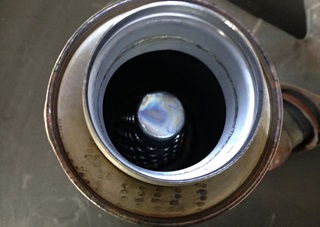 That said, there are companies out there that have made the investment in truly new PMA replacement components.  Aerospace Welding (AWI) is one of the largest companies; it holds PMA for most new exhaust components. The advantage of entirely new components is that the manufacturer is able to incorporate design improvements into their new PMA part. In the case of a Bonanza exhaust system, for example, the new AWI parts include additional slip joints in the design. Flame cones that are made from Inconel are another option for new mufflers. Inconel is a trademarked alloy of nickel containing chromium and iron that is resistant to corrosion at high temperatures. It’s more expensive than traditional stainless steel, but it’s the perfect material for the harsh environment of an exhaust system. In my opinion, it’s well worth the additional cost if you have the opportunity to choose between the two options.

There are many factors to consider when deciding whether to repair or replace components of your exhaust system, and there are many excellent shops from which to choose. Personally, I recommend sending the entire system in for IRAN (Inspect and Repair as Necessary) anytime that you have some part of the system that needs work. You already have the system apart and that labor is often the largest expenses in the repair. Exhaust systems are critical potential points of failure in our aircraft, so it pays to play it safe and fly with the confidence that yours is in top shape!

Next time, we’ll talk about the opportunities to improve the performance of your aircraft when replacing an aging exhaust system. Until then, happy flying!