Get the app Get the app
Already a member? Please login below for an enhanced experience. Not a member? Join today
News & Media Pilot Briefing: 2015 Sweepstakes

‘As good as it gets’

The “Reimagined” AOPA 2015 Sweepstakes 152 was built on an overly optimistic forecast. 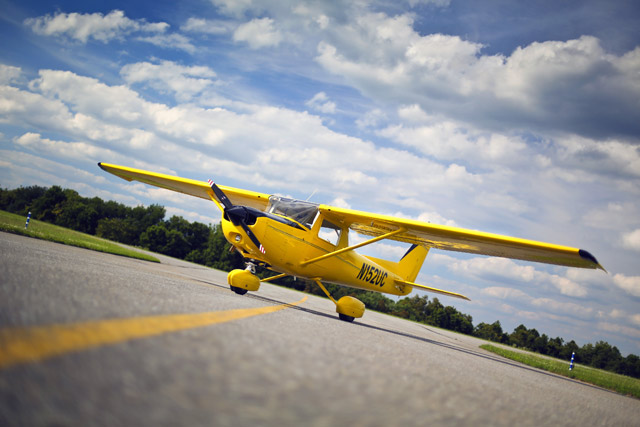 The “Reimagined” AOPA 2015 Sweepstakes 152 was built on an overly optimistic forecast. At the end of World War II, aviation analysts predicted a massive general aviation boom that would keep aircraft manufacturers busy for decades. In addition to two cars in every garage, they anticipated an airplane at every hangar and tie-down.

Cessna raced to meet the predicted demand with its two-seat Model 140 and stripped-down Model 120, and pumped out 6,000 of the side-by-side tailwheel airplanes from 1946 through 1948. The company replaced the fabric-covered, constant-chord wings on those models with a new, all-aluminum wing and increased the maximum gross weight 50 pounds (to 1,500 pounds) in the 140A.

The 140A wing had taper outboard of the wing strut attachment, and a single strut that met the main spar instead of the V-strut that had connected to the front and rear spars of the 140 and 120. Cessna built 525 140As between 1949 and 1951—and the 140A wing should look familiar, because its shape and airfoil are identical to the trainers that would follow.

The flight training market was growing in the late 1950s when Cessna launched its Model 150. This updated version had a tricycle (not tailwheel) landing gear; rectangular (not round) tail surfaces, and a 100-horsepower Continental engine (instead of 85- or 90-horsepower versions). The hinged flap also was replaced with a larger slotted flap that could droop a full 40 degrees.

But there was some disagreement about what to call the airplane. “The 170 became the 172 and the 180 became the 182 when they went to tricycle landing gear,” said Joe Latas, who retired from Cessna 12 years ago after 50 years as an engineer and chief aerodynamicist. “We called the new model the 152 at first. But then it got changed somehow to the 150.”

Except for some rib thickness changes and spar beef-up, the wing and strut used on the 1959 Model 150 (Model 140A wing modified to accept the large slotted flap) was also used on the 1978 Model 152. In the mid-1960s with the 150D there was a 100-pound gross weight increase, and in 1966 the straight vertical tail was swept aft for styling considerations.

1978, the year N152UC was built, turned out to be the high watermark for general aviation aircraft deliveries, with nearly 18,000 new airframes added to the fleet. The 152 faced competition in the training market from Piper with its Tomahawk and Beech with its Skipper, but the 152 sold particularly well against them because of Cessna’s powerful dealer network.

“If you were a Cessna dealer, you were required to take delivery of new airplanes whether you had sold them or not,” said Scott Bengston, a former Cessna employee and author of several articles about the development of Cessna aircraft. “The dealers would blow out the 150s and 152s at low prices just to get them off the books. As a result, there were many more 152s built than the market really demanded. The Cessna distribution system created a lot of sales for these airplanes.”

Bengston said the 152 was extraordinarily successful in the punishing flight training environment because it was economical, durable, and its flight characteristics prepared students well for heavier, more complex aircraft. “Learning in a 150 or 152 gave students the skills they needed to fly every other airplane Cessna built,” he said. “They could go on to a 182 or a 210 with no surprises.”

That’s partly due to the fact that so many high-wing Cessnas use the same shape for their outer wing panels.

Cessna had produced 7,584 of its 152s by 1985, when it shut down its entire piston line. And although the 172 has always been used for training, the company officially reentered the training market in 2009 with the Cessna 162 Skycatcher, a Light Sport aircraft. The move disappointed some 152 enthusiasts, who had wanted Cessna to put its proven 152 trainer back in production—even though it was slightly too heavy to meet the LSA weight limit.

“The 152’s weight turned out to be necessary to make it rugged enough to stand up to the flight training environment,” Bengston said. “Hindsight is always 20/20, but many of the LSAs have proven they just aren’t robust enough.”

Bengston says he remains a 152 fan. “From a mechanical simplicity and cost of operations point of view, the 152 is about as good as it gets,” he said. “The airplane was designed to train pilots, and it does that extremely well. That was true when the model was first introduced, and it’s true today.”

The AOPA 2013 Sweepstakes Tornado Husky’s fateful flight took place on a perfect autumn day in the Arizona mountains. The wind was calm beneath a cloudless blue sky, the airplane was in top mechanical condition.The pilot, David Dunteman, a military-trained airline captain and ATP who had logged more than 100 tailwheel hours during the preceding 12 months—was superbly qualified.

His plan to fly to the Red Creek Airstrip, a narrow, 1,200-foot dirt strip, was carefully researched. He familiarized himself with the place on Google Earth and visualized landmarks, abort points, and contingencies. He brought a highly experienced backcountry pilot with him who had been to Red Creek many times, and they overflew the strip at low altitude to check its condition before landing.

“I had anticipated that the landing would be the most difficult part of the flight,” he said. “It went according to plan, and I was elated. This was exactly the kind of flying I had looked forward to when I bought the Tornado Husky.”

After a morning hike in the Tonto National Forest, Dunteman and his passenger got back in the airplane for the flight home. On the takeoff roll, the airplane’s 26-inch tires fell into ruts that pulled the airplane to the left side of the dirt strip. Then the left tire became fouled in brush, and the left wing struck a mesquite tree. The airplane veered into rough terrain and scrub that knocked out the main landing gear, destroyed the three-blade MT propeller, and severely damaged both wings.

The pilots were unhurt, but the well-known Husky, which got its name from a close encounter with the March 2011 Sun ’n Fun tornado, was a total loss. The pilots were stranded at a remote strip where there was no cellphone coverage, and they hadn’t filed a flight plan. Fortunately, they had told friends and family members where they were going, and when they failed to return, those people notified authorities. A rescue helicopter retrieved them before the sun went down.

Dunteman faults himself for failing to devote as much attention to the departure from Red Creek as he had to the arrival. If he had carefully considered the takeoff, he said, he might have accounted for the deep ruts in the uneven surface and avoided them. Also, he had removed his survival gear (water, first-aid kit, sleeping bag, and satellite messenger) he usually keeps in the airplane. “I figured it was a local trip so I wouldn’t need all that,” he said.

Dunteman was concerned the incident would result in certificate action. His formerly spotless military, airline, and GA record was now marred. But there were no repercussions from the FAA, his airline employer, or insurance company. “I made the required notifications and was completely candid,” he said. “The system worked the way it’s supposed to, and everyone I talked to was professional, cooperative, and understanding.”

Dunteman talks to aviation groups about his Husky mishap and the things he learned from it, and he calls his presentation “Lessons from My Beloved Dog.” It’s at times surprising, funny, insightful, and poignant.

Dunteman takes aviation culture to task for a code of secrecy and reluctance among pilots to fess up to errors that peers can learn from. His openness is meant to provide an example of what he hopes will become a more safety-oriented flying culture in which pilots evaluate their preparations and qualifications for every flight in a clear-eyed way, and share lessons learned without fear of judgment.

After his talks, other pilots seek him out to confess their own lapses—most of which he suspects they’ve never spoken openly about. “I learned some painful lessons,” he said. “But if I can help other pilots avoid repeating them, I’m happy to do it.”