Get the app Get the app
News & Media Membership News & Notes: Saving Airports

Reporting on some AOPA victories

If your airport receives federal funds, federal law requires the airport must be used for aviation purposes. 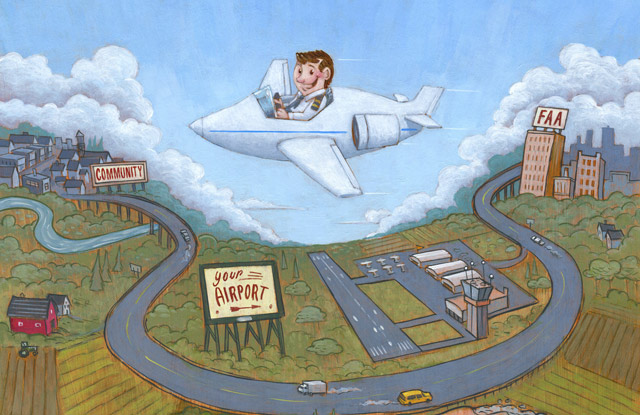 If your airport receives federal funds, federal law requires the airport must be used for aviation purposes. The FAA has clarified its rules on how this affects fuel taxes, making clear that local taxes on aviation fuels imposed after December 30, 1987, are subject to this requirement—and that revenue from state taxes on aviation fuel must be used for a state aviation program, or for airport-related purposes. Airport sponsors and states now have three years to review their aviation fuel taxes and begin applying them correctly.

• When Colorado Springs, Colorado, imposed a 2.5-percent sales tax on the value of aircraft based at the airport, the exodus began. The airport lost 20 percent of its based aircraft and a lot of business. City leaders and airport advocates began working together to make the airport’s tax climate more GA-friendly. Airport Support Network volunteer Steve Ducoff worked with AOPA to win passage of a city sales tax exemption that would create a commercial zone in and around the airport. The state passed AOPA-supported legislation providing aviation manufacturers an income tax credit of $1,200 per new employee hired.

• Plans to build a hotel near Maryland’s College Park Airport could create a potential hazard that could lead to aircraft collisions or restrictions on the airport. AOPA is urging local authorities to insist that the structure be capped at 198 feet above mean sea level—not 233 feet msl as now planned—and that the developer obtain a “no hazard/no obstacle” determination from the FAA.

• Two GA airports located two miles apart in northeast Oregon are coming alive, thanks to pilots and area residents who have taken on a variety of projects to enhance the airports’ value to their Wallowa County communities. Enterprise Municipal Airport and Joseph State Airport are relatively close together, but each plays an important role. seeking ways to enhance their airports. Working together, they are renovating facilities, holding open houses, raising funds, adding Wi-Fi, hosting a ground school and pinch-hitter session, and purchasing a flight simulator.

Survey: 65% of AOPA members believe the closure of airports and access restrictions are of high importance.

Membersheip: Action in the states

Virginia: Pilots brought Christmas joy to families around the state with a Christmas Toy Airlift sponsored by The Ninety-Nines and the annual Tangier Holly Run, which delivered holiday treats to residents of Tangier Island.

The FAA has increased the number of aviation training device (ATD) hours pilots may count toward an instrument rating. This will allow pilots to log up to 20 hours of simulator training time in approved aviation training devices. It restores training standards changed last year when the FAA issued a policy statement that would have cut in half the number of hours that could be logged toward the instrument rating.

“We appreciate the FAA’s willingness to address AOPA’s concerns and the agency’s definitive, timely response,” said David Oord, AOPA manager of regulatory affairs. “ATD training is efficient and cost effective, and we’re pleased students will be able to take advantage of the newest technology to hone their skills. Ultimately, it’s skills, knowledge, and risk management that make a safe, competent pilot—not how he or she learns it. ATDs allow pilots to experience a wide range of weather, scenarios, and flight conditions that would be impractical or impossible to replicate in an airplane.”

In addition, the rule eliminates the requirement that pilots wear a view-limiting device while conducting instrument training in a simulator. 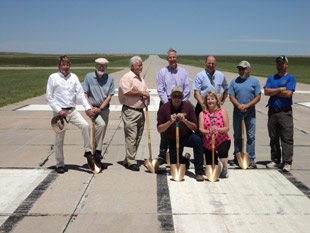 Sailsbery’s penchant for record keeping paid off; after years of encouraging local officials to act, Fort Morgan broke ground on a long overdue new runway. The current runway is too short, too steep, and too close to a local highway to meet FAA standards. The pavement has been deteriorating. The new runway will be more than 500 feet longer, and run parallel to the old one. The new runway will help preserve the airport’s role as an important economic development driver for the entire region.

Sailsbery says that, while unable to serve directly on the airport committee, his constant presence at the airport has helped keep local officials on track to get the new runway built, despite many changes. His advice to airport advocates is to start early, and maintain focus to move projects forward.

The FAA has statutory authority to deny medical certificate applications. It exercises this authority using the medical standards set forth in 14 CFR Part 67. There are two distinct options available to pilots who wish to question and/or dispute a medical denial—FAA reconsideration and NTSB review.

FAR 67.409(a) establishes that a person may seek reconsideration within 30 days of a denial by an aviation medical examiner, but AMEs are designees of the FAA and rarely deny applications—instead they defer the decision to the FAA. So, more commonly, it’s the federal air surgeon, a regional flight surgeon, or the manager of aeromedical certification division that denies a medical application by sending you a letter telling you the reason for the denial.

Practically speaking, reconsideration is available regardless of who does the denying. Essentially, in seeking reconsideration, a person is asking the FAA to reconsider the denial and to reassess the person’s eligibility for medical certification. The request must be made in writing and normally should include medical information in support of the request, such as doctor statements and test results. In reviewing the request, the FAA may also consider the person’s eligibility for a special issuance medical certificate (authorization). If the FAA is unpersuaded by the request, it will issue another letter confirming the denial.

A final denial by the administrator may be appealed to the NTSB. More accurately, an airman may file with the NTSB a petition for review of the administrator’s denial, often referred to as an appeal. It’s notable that the referenced “administrator” includes the federal air surgeon, the manager of aeromedical certification division, and regional flight surgeons, but does not include an aviation medical examiner. In other words, an AME’s denial is not considered a final denial by the FAA.

The petition must be filed within 60 days of the denial and it basically constitutes a request for a hearing with an NTSB law judge. At the hearing, the petitioner and the FAA will both present evidence and expert testimony to support their positions, and the law judge will make “findings and conclusions upon all material issues of fact, credibility of witnesses, law, and discretion presented on the record.” In the end, it’s often an uphill battle for the petitioner, as he or she has the burden of proving eligibility for medical certification.

Mike Yodice counsels legal service plan/pilot protection services members on such issues as FAA compliance and enforcement. He is an active pilot and regularly flies a Piper J–3 Cub and Cherokee 180.

Answers for Pilots: Aircraft maintenance tasks you can do yourself

If inclement winter weather is keeping you on the ground, make the most of your time in the hangar by working on your airplane. The FAA allows aircraft owners to perform many preventive maintenance tasks, provided they do not involve complex assembly operations (see FAR Part 43, Appendix A, paragraph C—Preventive Maintenance).

For a complete list of do-it-yourself tasks, read February’s online Answers for Pilots. If you have questions, please call the aviation technical specialists in the Pilot Information Center, Monday through Friday, 8:30 a.m. to 6 p.m. Eastern time, at 800-USA-AOPA (872-2672).

AOPA Foundation: Do you know about the Hat in the Ring Society? Take a leadership role in protecting general aviation.

The air safety institute has kicked off its new Learn and Earn Safety Challenge, which enters you into prize drawings for cool aviation gear each time you complete one of ASI’s free online safety courses, Real Pilot Stories, and Accident Case Studies. Here’s how it works.

First, ASI invites you take its interactive safety challenge that will match you up with a course tailored specifically to your experience level and flying style. It’s not only fun to take the challenge, but it also provides an easy place to start while assuring you are taking a course that qualifies for the prize drawings. Next, you can take the challenge as many times as you like—or just go to your online transcript to identify other qualified courses you wish to take. To top it off, you will be rewarded by gaining new knowledge while honing your flying skills, and any time you complete a qualified course you will automatically receive an additional entry into the prize drawings—so take more courses to earn more chances to win.

The Air Safety Institute’s Learn and Earn Safety Challenge will run throughout 2015, with four separate winners announced in each quarter. 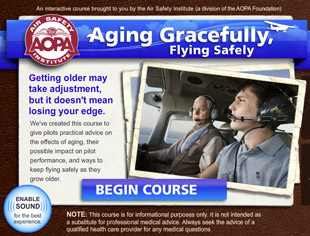 You may be young at heart, but time marches on and eventually the question arises whether you should be flying the same way you did when you were younger. Do you worry about hearing and copying ATC clearances when in busy airspace? Or are you having trouble reading the chart at night in a dimly lit cockpit? What about your physique—can you still fly those long trips without getting fatigued or muscle cramps?

If any of these issues keep you awake at night, then pay attention: The Air Safety Institute’s Aging Gracefully—Flying Safely course was created to provide practical advice on the effects of aging and how it might impact pilot performance, while also offering suggestions to keep flying safely as we grow older. The course examines how we can help ourselves by honestly evaluating our mental and physical abilities, and learning techniques to improve both.

To help you work successfully through the process and continue to enjoy flying, ASI contacted several pilots who have been there, done that, and learned to understand how the aging process is affecting them. In Aging Gracefully—Flying Safely, they share their views and techniques for coping with a number of age related issues.

Visit the website for dates and locations near you. 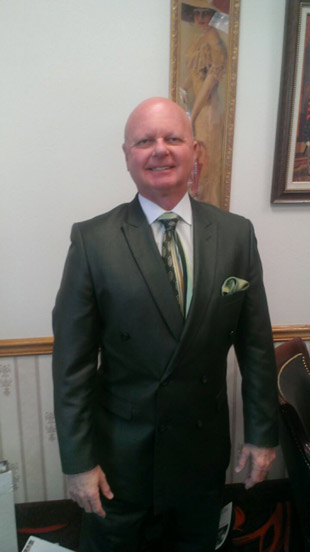 Allen Yarborough learned to fly in 1968; he trained in Tomahawks and expected that his flying would simply be a hobby. But soon he moved up, to a Bonanza and a twin. “I purchased a Navajo in 1988, and for a number of years I used my twin for business flying to my multiple stores in two states,” Yarborough says.

He sold his businesses in 2008 and says, “I tried to retire, but I couldn’t get used to being in retirement.” He bought a Turbo Arrow IV so he and his wife could visit their grandchildren in another state. “I chose the Arrow because of its speed and altitude capabilities, as I was used to the twin, but I wouldn’t need the extra seating and the operating cost were dramatically lower per hour,” he says.

When he was shopping for insurance, he called AOPA because he had been a member since the late 1990s. “They were extremely helpful and were able to get me multiple price quotes,” he says. “I was pleasantly surprised at how inexpensive full coverage was.” Would he recommend AOPA Insurance Services to other pilots? Of course. “I highly recommend that any pilot or aircraft owner who needs insurance give AOPA a call.”