Get the app Get the app
Already a member? Please login below for an enhanced experience. Not a member? Join today
News & Media GA safety improving as NTSB targets loss of control 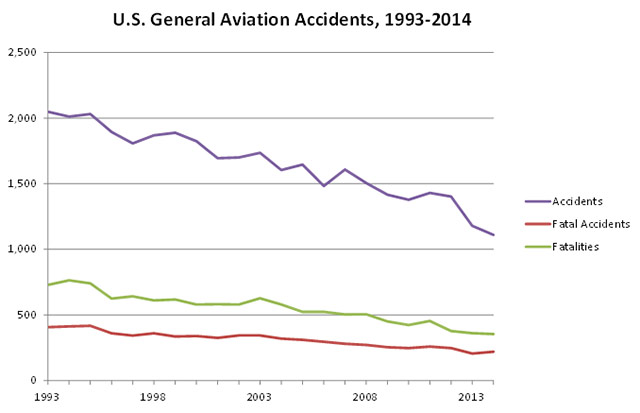 The National Transportation Safety Board (NTSB) on Jan. 13 named general aviation loss-of-control accidents to its Most Wanted list of safety concerns, even as GA accident rates have declined and the industry continues to push for regulatory reforms that will make it easier to put advanced safety technology into both new and older aircraft.

“Safety is the top priority for every pilot on every flight, and that’s reflected in the steady decline in GA accident rates,” said AOPA President Mark Baker. “By putting loss-of-control accidents on its Most Wanted list, the NTSB is sustaining the focus on an issue that has been at the forefront of safety efforts by AOPA, the aviation industry, and the FAA for some time.”

In 2013, the most recent year for which complete data are available, general aviation pilots in the United States flew nearly 23 million hours and the total number of accidents involving helicopters and light airplanes declined 32 percent compared to a decade earlier. The number of fatal accidents declined by 40 percent during the same 10-year period and the fatal accident rate dropped to an all-time low of .90 fatal accidents per 100,000 flight hours.

“2013 was the safest year on record for GA and the first time ever the fatal accident rate dropped below 1 accident per 100,000 flight hours,” said Baker. “Education, training, and technology all played a role in that success, and we believe making it easier to bring modern safety equipment into the cockpits of existing type-certificated aircraft  will help make GA even safer. We’re working with the FAA and industry to lower the regulatory barriers that have prevented many aircraft owners from upgrading their equipment.”

AOPA co-chairs the General Aviation Joint Steering Committee, a standing government/industry committee that uses a data-driven process to identify, manage, and mitigate risks. AOPA also co-chaired a multi-year working group, as part of the General Aviation Joint Steering Committee, tasked with analyzing loss-of-control accidents that produced 29 specific recommendations, including changing the FAA’s approach to aircraft certification in order to speed safety enhancements into the cockpit. The proposed changes are intended to better reflect rapid advancements in technology and ensure that more aircraft owners have access to the latest safety equipment.

AOPA and others, as part of the Certification Process Study and the Part 23 Reorganization Aviation Rulemaking Committee, have worked closely with the FAA since 2008 to reform the agency’s complex certification regulations with the goal of producing “twice the safety at half the cost.”  In 2013, the president signed the Small Airplane Revitalization Act, which set a 2015 deadline to complete certification reforms. While the FAA has said it will miss that deadline, the agency has made progress in some areas, including approving the use of angle of attack (AOA) indicators in GA aircraft as a means to increase situational awareness and prevent loss-of-control accidents. In urging the GA community to embrace the technology, the FAA cited the recommendations of the General Aviation Joint Steering Committee and a study of 2,472 fatal general aviation accidents that found in-flight loss of control was the most prevalent cause.

While the FAA has made some progress, the majority of emphasis has been on Part 23 reform, which would make it easier to put advanced safety technology into new aircraft. AOPA and others have also been pushing the FAA to reform rules to allow new technology into existing aircraft.

“If we want to increase safety and reduce certification costs, we need to include the existing fleet as well as new production aircraft,” said Baker. “That means regulations, orders, and policies regarding the maintenance, installation, and modernization of existing aircraft must also be streamlined and transformed.”

There are more than 200,000 aircraft in the existing general aviation fleet, including more than 100,000 IFR-equipped aircraft, the majority of which are using technology from the 1960s through the 1980s.

General aviation pilots can benefit from several of the other NTSB targets, including reducing distractions, ending substance impairment, procedural compliance, and requiring “medical fitness for duty.”

“Making flying safer is a process of continuous improvement, and GA safety has come a long way in the past decade. We will continue working with the NTSB, FAA, and aviation industry to ensure that trend continues,” said Baker.