Get the app Get the app
Already a member? Please login below for an enhanced experience. Not a member? Join today
News & Media Exhausting maintenance: Performance improvements

Exhaust system design is critical to the ultimate power output of an aircraft engine. Regardless of improvements to induction air flow, compression, cylinder porting, or combustion timing, a poorly designed exhaust system will always limit the power that your engine can deliver.

On the flip side, a very well designed exhaust system can actually help increase engine performance, rather than restrict it.  It’s all about timing, airflow, and the concept of the tuned exhaust system.  As Sir Isaac Newton taught, for every action, there is an equal and opposite reaction. This holds true for your exhaust system as well. For every pressure pulse of exhaust gas flowing through the pipes of the system, there is also a vacuum left behind it. In truth, tuned exhaust systems are very complex designs that incorporate specific engine RPM ranges and the resulting resonant frequency of the entire system, matching the series of gas pulses flowing through it.

Essentially, a tuned exhaust system is a little like auto racing and a little like designing a wind instrument. The goal is to create an exhaust system with tubes of equal length that join together so that all of the exhaust pulses flow, one after another, without conflict. Then, make the entire system of just the right length for the frequency (or tune) of the pulses. By lining up the pulses, they can each “draft” from one another, using the energy of the first pulse to drag along the one behind it. Properly designed, a tuned exhaust system also can help scavenge the exhaust gasses from the cylinder, increasing the amount of charge flowing in as well. And, by making the tube just the right length, it resonates perfectly and helps exhaust gasses exit the system with the highest velocity possible.

If you are in need of a new exhaust system, or just looking for new ways to improve your aircraft’s performance, there are only a few options available in the certified aircraft world (there are many options for experimental aircraft).

Power Flow Systems has developed and supplemental type certificated tuned exhaust systems that are direct replacements for the original systems. The cost is high, but the results are impressive. In comparative testing of a 150 horsepower Cessna 172 engine, dynamometer testing showed that neutral “short” stacks produced 159 hp while the stock Cessna 172 exhaust system brought the engine output down to 133 hp. When the Power Flow tuned exhaust system was mounted, the engine produced 157 hp. That’s a lot of extra ponies simply by adding efficiency to the output of the power system. Diamond Aircraft has been using the Power Flow exhaust systems on their DA40 as standard equipment for some time now. 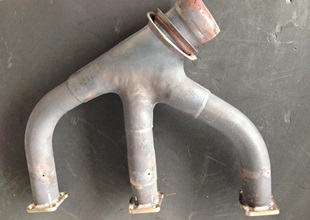 One example of poor design is the exhaust headers found on most Beech Bonanzas. The original design of the headers looks like a three-way fork with the opposite pipes basically forcing exhaust against each other. It’s things like this that lead one to wonder if the designer was just really off his game that day or if there’s some design rationale that’s just lost on us mere mortals. 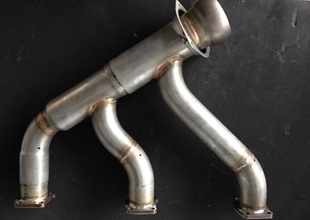 In the case of the Bonanza, Aerospace Welding (AWI) has supplemental type certificated replacement components with improvements designed to remove obvious restrictions and points of conflicting flow in the system. The AWI headers completely reorient the pipes to direct the exhaust gasses in the same direction. In addition, the pipe diameter increases as the exhaust from each cylinder joins the flow path. The new system also includes several slip joints to eliminate the stresses that are known to cause fatigue fractures in the original headers. The AWI system is less expensive when compared to a tuned exhaust system, commensurate with the degree of performance improvement you can expect. The fact that these systems are also less prone to failure is valuable in itself.

The additional power from one of these new exhaust systems can be utilized in one of two ways: increased performance or increased efficiency. In other words, you can go faster with more power or simply go the same speed, but burn less fuel. Don’t expect to have your cake and eat it too. Just enjoy the ride and the confidence that a new exhaust system brings during that next long cross-country flight!