Get the app Get the app
Already a member? Please login below for an enhanced experience. Not a member? Join today
News & Media Super Bowl XLIX notam released 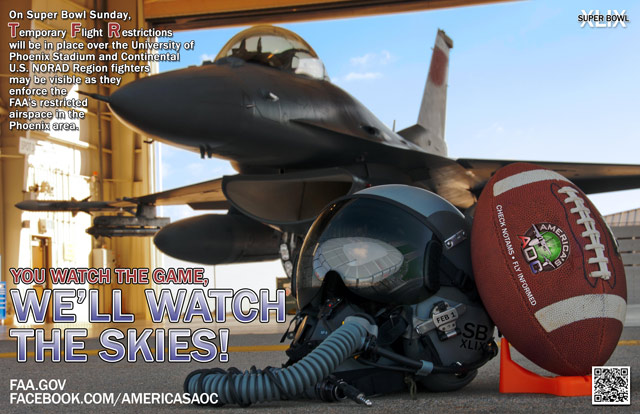 The FAA has released a notam establishing a temporary flight restriction over the Glendale, Arizona, area for Super Bowl XLIX. Pilots flying in to watch the Patriots and Seahawks battle for the championship should study the notam.

A 30-nautical-mile radius TFR extending up to and including 17,999 feet msl will be in effect from 3:25 until 11 p.m. local on Feb. 1. The TFR will contain an inner 10-nm general aviation no-fly zone that will shut off GA operations at Glendale Municipal (GEU) and Phoenix Goodyear (GYR) during the same time period. The FAA noted that some approach and departure paths for Phoenix Sky Harbor International (PHX) may be impacted because of the airport’s location near the no-fly zone.

Pilots flying between the 10-nm and 30-nm rings must be on an active IFR or VFR flight plan, squawk a discrete transponder code, and remain in two-way communication with air traffic control. (See the notam for a list of prohibited flight operations in the area.)

Because of the increased security associated with the Super Bowl, the North American Aerospace Defense Command said it will have fighters in place to enforce the TFR. Airports in the Phoenix area also are beefing up security, according to The Arizona Republic.

“Security will be heightened in the air and on the ground in the Phoenix area,” said Tom Zecha, AOPA manager of aviation security. “Pilots should study the notam in advance and check notams prior to flight in the area the day of the Super Bowl.

“Let’s keep the focus on the game and not on any airspace incursions.”