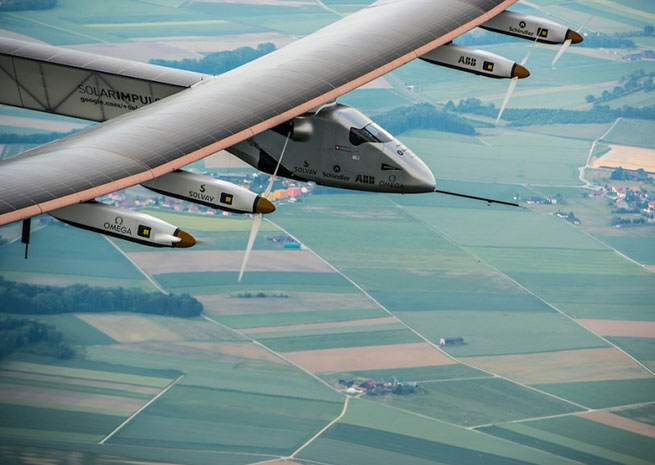 Twelve years of study, research, design, and testing will culminate in late February or early March when Solar Impulse 2 (Si2) launches on a solar-powered attempt to circumnavigate the world. The Solar Impulse team announced Jan. 20 the planned route pilots Bertrand Piccard and André Borschberg would take on the round-the-world flight that is expected to take about five months.

Piccard and Borschberg will alternate flight legs in the single-seat aircraft. Si2 will take off from Abu Dhabi, United Arab Emirates, and make stops in Uscat, Oman; Ahmedabad and Varanasi, India; Mandalay, Myanmar; and Chongqing and Nanjing, China. It will fly across the Pacific Ocean through Hawaii and stop in Phoenix and New York City in the United States. The team said it will make another stop somewhere in the Midwest. They have yet to announce where they will stop in southern Europe or North Africa on the return to Abu Dhabi.

The carbon-fiber aircraft powered by 17,000 solar cells that recharge lithium batteries for night flight has a wingspan of 236 feet, which is larger than a Boeing 747-8I wing span, and weighs 5,000 pounds, or about the same as a car, according to the Solar Impulse website. During the past 12 years, 50 engineers and technicians, 80 technological partners, and 100 advisors and suppliers have worked on Solar Impulse 1, the prototype that made numerous flights and was used to gather data to perfect the final craft, and Si2, the site said.

“Imagine energy reserves increasing during flight! To make this dream a reality, we had to make maximum use of every single watt supplied by the sun, and store it in our batteries,” said Borschberg, who led the engineers and technicians. “We tracked down every possible source of energy efficiency. Today, Solar Impulse is the first solar airplane flying through night and day, the first aircraft to come close to perpetual flight.”

Solar Impulse 1 made multiple day and night flights, and flew from Switzerland to Morocco and back in 2012 , across the United States in 2013, and to multiple European destinations. Si2 made its maiden flight test June 2.

The trip is expected to take about 500 flight hours; each pilot will spend “up to 5 or 6 days and nights in a row” and endure temperatures ranging from plus to minus 40 degrees Celsius in the unpressurized, unheated aircraft, the website said. They will have six oxygen bottles, a parachute and life raft, and enough food and water for a week.

During these long legs, “self-hypnosis and meditation techniques allow the pilot to maintain his powers of concentration and vigilance,” the website said. Meanwhile, mission control will have continuous access to data being fed from the aircraft, and doctors who specialize in high-altitude medicine will be available during the flights as well.