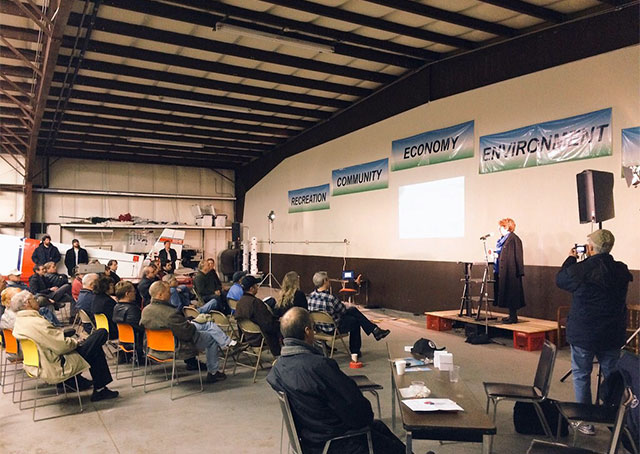 On the surface it was simple enough—a gathering of nearly 100 pilots, exhibitors, lawmakers, and others packed into a hangar at Minute Man Air Field in Stow, Massachusetts. The Jan. 21 event, now an annual affair to kick off the new year, drew its largest crowd yet, including representatives from state government, aviation businesses, AOPA, and charitable organizations (including Angel Flight, LightHawk, and Pilots N Paws).

“Beneath all of the legislative and advocacy work I do for AOPA, I’m a pilot at heart,” Collins said. “Being a part of the close-knit aviation community is something I would do without the AOPA title, but it’s that part about the true grassroots community that is Minute Man Air Field—and so many other airfields across my region—that makes my job special.”

Collins, like other AOPA regional managers, is on a mission to build cooperation between pilots, airport operators, lawmakers, the industry, and the public. He detailed his mission—and AOPA’s—for the assembled guests.

“The synergy that builds from these events is exactly what AOPA hopes to tap into as we work to build the pilot population of tomorrow,” Collins said. “Building on the success of grassroots (family) aviation is what keeps our small but powerful industry alive. Come to any event like these and you’ll know, GA is still alive and well—it just needs to be nurtured.”

Collins is based in Massachusetts, which is among the most GA-friendly states in the union thanks to strong, cooperative leadership in the public and private sectors alike.

Christopher Willenborg, administrator of the Aeronautics Division of the Massachusetts Department of Transportation (and a former airport manager) said McPherson and his wife, Nancy (the chef behind Nancy’s Airfield Café—in a word, scrumptious), have worked hard to engage the local community, hosting events that welcome one and all. They also support local agriculture and industry, and promote general aviation’s vital role in economic and workforce development. The airport hosts 10 commercial tenants in all, and also hosts three bee keepers at the Airfield Apiary.

McPherson and the airport directors have “just done a great job reaching out” to the community, Willenborg said. “It is a great example of the type of activities airport owners and managers should do to build goodwill and work with the community.”

Minute Man is not alone in this regard, Willenborg noted. Across the state, other airports do much the same thing, and the 39 public-use airports collaborate closely with state officials through their own, very active statewide association.

The owner, director, and friends at Minute Man continue to work with federal, state, and local officials toward the second phase of a runway restoration project, and Willenborg said Minute Man is also not alone leveraging public and private investment to upgrade infrastructure. Other airports in the state are also finding creative ways to finance needed improvements, and strengthen connections to the communities they serve as they raise awareness of the many important functions that airports serve beyond the basics of arrivals and departures.

Collins plans to return to Minute Man for future events, and invites AOPA members to join him.