Get the app Get the app
Already a member? Please login below for an enhanced experience. Not a member? Join today
News & Media August 22, 2015: AOPA Fly-In Minneapolis, MN

A special section for the AOPA Fly-in at Minneapolis, Minnesota

Join us in the land of 10,000 lakes for a fly-in that will delight every pilot and aviation enthusiast. 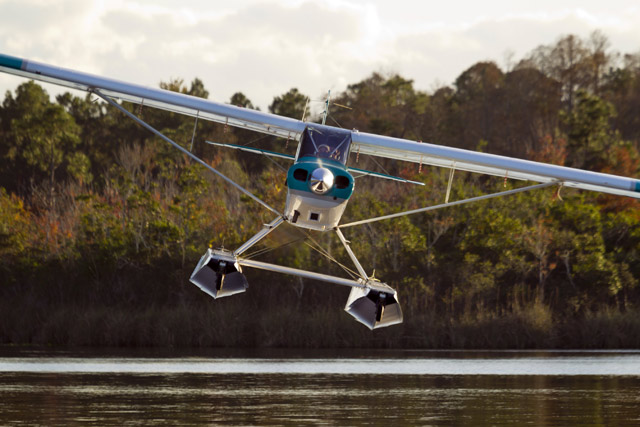 Join us in the land of 10,000 lakes for a fly-in that will delight every pilot and aviation enthusiast. Anoka County-Blaine Airport is in a suburb of Minneapolis, on the banks of the Mississippi and Minnesota rivers. This will be the first AOPA Fly-In to feature seaplanes—at the nearby seaplane base at Surfside (8Y4).

TOP 10 REASONS TO COME TO ANOKA

1 Surfside Seaplane Base (8Y4). Get a seaplane rating, maybe take an introductory flight, or head off on guided or group adventures.

2 Golden Wings Flying Museum. This priceless collection of antique aircraft shows the breadth of aviation innovation and experimentation during the 1920s and 1930s.

3 Cabela's. Cabela's in nearby Rogers, Minnesota, has everything from thermal blankets to fishing gear.

4 Lindey’s Prime Steak House. If you’re looking for an excellent steak, burger, or anything else carnivorous, Lindey’s in Arden Hills is the place.

5 Como Park Zoo and Conservatory. This century-old St. Paul attraction has the traditional animals ranging from anacondas to zebras, but it’s also got a wide variety of plant life in its elaborate gardens.

9 Stanton Airfield. On the National Register of Historic Places, and the owners of this public facility keep it looking much as it did in its heyday.

10 Morey’s Seafood. Fly out with smoke salmon, walleye, or whitefish. The company sells both fresh and smoked fish all over the world.

Golden Wings and its overlooked innovations 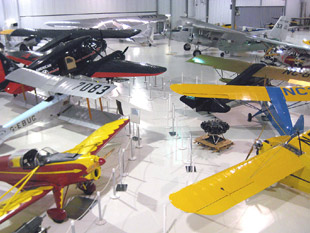 Visitors will get an up-close look at some of the pioneering airplanes that shaped modern aviation at the Golden Wings Flying Museum during the AOPA Fly-In. The private collection owned by Greg Herrick will be open for tours during the August 22 event, and some of its aircraft will be on display around the airport. Herrick and AOPA President Mark Baker will tell stories about the museum aircraft on Saturday morning on the Main Stage.

The museum’s collection is almost exclusively made up of Golden Age aircraft designed and built in the 1920s and 1930s when aviation was undergoing rapid technological innovation, experimentation, and explosive growth. But instead of focusing on products that later became mainstream, the Golden Wings collection shows the runners up, and contenders that time has largely forgotten.

There are two Stinson trimotors, for example, including an exceedingly rare low-wing model; a Fleetwings Sea Bird with a stainless-steel skin; and a Curtiss Fledgling—a rival to the Stearman biplanes that later became ubiquitous military pilot trainers.

Aviators tend to think of aviation progression as linear: the P–51 Mustang begat the F–86 Sabre which begat the F–16 Fighting Falcon. In truth, aviation’s evolutionary tree is far richer with many branches, and countless roads not taken.

The Golden Wings museum shows there were diesel engines powering biplanes in the 1920s and 1930s, and many promising products that, for a variety of reasons, failed to gain traction in the broader marketplace. One gets a sense viewing the Golden Wings collection that there was nothing inevitable about the way aviation has turned out—and that the industry’s future is wide open. 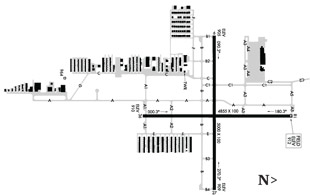 • Read the notam, and get familiar with arrival procedures.

• Do your homework, stay flexible, and be ready to enjoy a terrific day of aviation.

6:30 to 9:30 p.m.­—Barnstormers Party sponsored by Wipaire Inc at the Surfside Seaplane Base at nearby Rice Lake (reservations recommended).

RSVP and reserve your meal tickets! 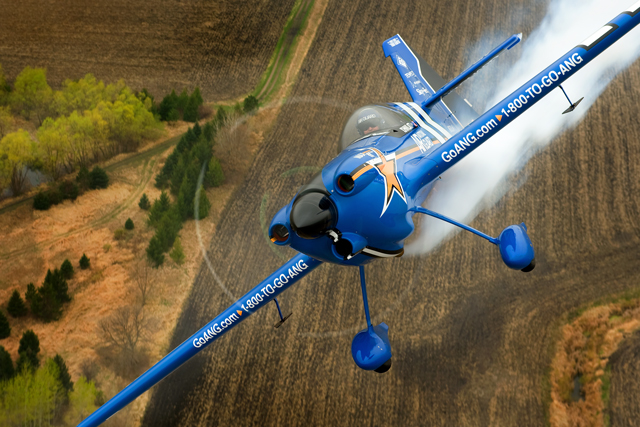 You won’t believe what’s going on in Anoka

There’s a lot going on at Anoka County- Blaine Airport (ANE)—but most of it is hidden behind closed hangar doors for protection from the cold at least half the year.

Those doors will be wide open during the August 22 AOPA Fly-In, when rare airplanes from the 1920s and 1930s will be available for close-up viewing at Golden Wings Flying Museum. And AOPA, with lots of help from local aviators, will host fellow pilots and aviation enthusiasts across the region.

“I’ve got a personal affinity for the place, but it’s also a great location for this event in its own right,” said AOPA President Mark Baker, who learned to fly at Anoka County while a student at the University of Minnesota in the late 1970s, and currently owns a hangar there. “I like the fact that all the hangars are privately owned because it creates a strong community and real connections. The people I’ve met at the airport and become friends with over the years, I probably wouldn’t have met any other way. The place has brought us together, and those friendships have had a tremendously positive influence on our lives.” 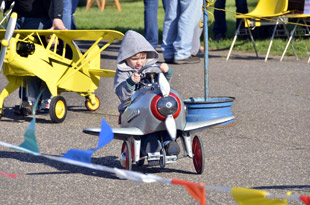 The Anoka County airport was originally called Janes Field (ANE drops the first and last letters), and it’s located in Class D airspace, and some of the contract controllers there have previous experience at the nation’s busiest facilities. Anoka County Airport (no one calls it “Blaine”) has two intersecting runways, and it can get busy with a mix of trainers, exotic warbirds, and corporate turboprops and jets.

“We get a tremendous variety of aircraft and pilots of different experience levels, and it all works,” said Glen Nygard, a controller who has worked in the Anoka tower since it opened in 1996. “We get to know so many of the pilots on a personal basis, and they’re a fantastic group.”

The general aviation aircraft based at the airport mainly reside in three areas. The south portion of the field is dominated by two big aviation museum hangars, and a collection of former military aircraft is parked outside. The east side of the field has the most general aviation aircraft, and hangars range from simple storage to elaborate, wood-panel meeting rooms, and restoration facilities. The “Fox Hollow” portion of the airport next to the Key Aviation FBO is the newest GA area.

Airport residents are accustomed to rolling out the red carpet for guests. They’ve long hosted “Discover Aviation Days” for the local community, as well as informal warbird gatherings. The AOPA Fly-In will offer lots to do for the broader aviation and local community.

The Barnstormers Party will be held at Surfside Seaplane Base Friday night and will feature airshow performer John Klatt (image on top), who will fly his Extra aerobatic routine. Free ground transporation will be provided from the Golden Wings Flying Museum to the seaplane base.

“Floatplane rides are something that will be offered by Adventure Seaplanes—and that’s going to be a real treat for pilots who haven’t been exposed to that kind of flying,” Baker said. “This is the place I got started in aviation, and I can’t wait to share it with our fellow AOPA members.”

The “Front Porch Swingin’ Liquor Pigs” will entertain with their eclectic brand of music, which covers everything from jug band, blues, folk, country, and a little Irish at Surfside Seaplane Base Friday night. Rack Shack BBQ is an award-winning Minneapolis purveyor offering Southern-style barbeque, which was featured on the television show Man vs. Food. They will be serving at the Barnstormers party.

AOPA’s fifth president, Mark is an accomplished general aviation pilot with more than 7,500 hours, multiple ratings, and an owner of numerous airplanes over the years.

An aviation author, humorist, AOPA columnist, and certificated flight instructor, Rod is on a one-man mission to keep the fun in learning. He has logged nearly 10,000 hours of instruction, one student at a time.

Commanding officer of the USS Cole when it was attacked on October 12, 2000, in the port of Aden off the coast of Yemen, Kirk is an avid pilot and AOPA life member. He shares his story of the attack on the Cole and lessons learned that can affect us all in our flying.

Greg is one of the nation’s preeminent collectors of Golden Age aircraft and a promoter of GA. He has been named a “Living Legend of Aviation” and was inducted into the Minnesota Hall of Fame. Congress recently passed the Herrick Amendment mandating the FAA protect, preserve, and make available aircraft design data and drawings from the dawn of civil aviation.

An airline transport pilot who has flown for the FAA, NASA, General Dynamics, the Washington Redskins, and most recently JetBlue, Adrian focuses on owner-performed maintenance and flying safety.

After retiring from the CIA in 1988, Woody took up flying in 2000. In 15 years, he has accumulated more than 7,300 flight hours and is a five-time Master CFI, a Gold Seal CFI, CFII, MEI, CFI-G, AGI, ICI, and DPE. He is a member of the Red Wing Soaring Association and on the Wild River Flying Club board of directors.