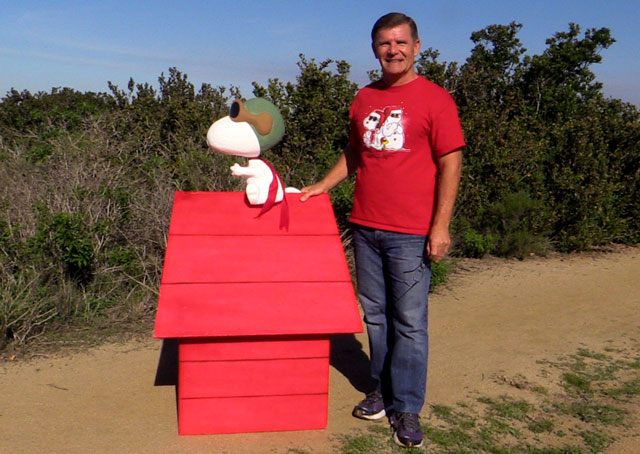 Many of his drone-like creations (actually they use flying surfaces and flight controls) have flown for promotional reasons and were created by his San Diego company, Flyguy Promotions. Not Snoopy. That was a personal project.

Snoopy begins flying July 9 at Comic-Con International in San Diego, attended by hundreds of thousands of people. Look for demonstration flights along the beach over the water. 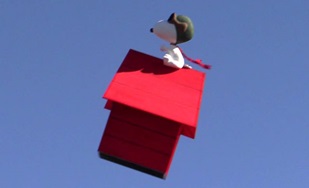 Dieffenbach traded his ground crew hours for flight lessons as a kid and got his private pilot certificate for single-engine land and sailplane aircraft. He has been too busy for the past few years to fly, but made a career of it in the Air Force, flying the McDonnell Douglas F-4 Phantom and later becoming a test pilot.

He calls his contraptions a “quad device” rather than a drone because they blend a great many aeronautical technologies, including thrust variation to change attitude. They are all homebuilt rather than based on a commercial drone. Each has a homebrew computer brain that aids stability. He recalls attempts by others to fly Snoopy atop his house—sorry, Snoopy, of course it’s a Sopwith Camel—that were unsuccessful in 1967, but with today’s technology you can literally make a doghouse fly. I mean Camel, "make a Camel fly."